Resolve: “All In” on GOM Skimming Ops 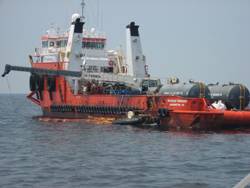 Resolve Marine Group has deployed its fleet of vessels to serve the pollution prevention and oil skimming operations in the Gulf of Mexico. Resolve has been operating out of its Theodore, Alabama port since the explosion on the Deepwater Horizon oil rig on April 20, 2010.  Resolve was initially deployed to support the firefighting effort on the Deepwater Horizon rig and has since deployed more than 50 vessels and floating assets in support of the oil spill skimming and clean-up activities, as a subcontractor to BP. Resolve’s primary focus has been the initial logistical planning for the skimming operations, the containment, management  and removal of  surface crude oil, and the prevention of  oil  reaching  beaches and infiltrating wetland areas on the Gulf coast in Louisiana, Mississippi, Alabama and Florida.   Resolve crews have been engaged in a variety of operations including: deployment of vessels, laying boom, positioning skimming equipment in specific spill locations, transporting collected crude oil to BP facilities, and decontaminating vessels employed in the spill areas prior to their return to protected ports and harbors.  More than 100 Resolve personnel and subcontractors have been working 24 hours a day, 7 days a week on the clean-up. Resolve Marine Group’s fleet of more than 50 floating assets comprise tug boats and crane barges that are supporting clean-up operations throughout the Gulf oil spill area. Resolve has deployed  more than 100,000 feet of boom to date as part of the spill containment effort. Resolves barges are equipped with skimming equipment operated by NRC, an Oil Spill Response Contractor  to BP.  The oil is being skimmed and collected in tanks onboard the barges and transported to BP facilities for decanting and processing.