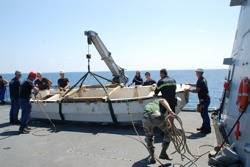 The French Navy frigate Acconit was heading towards a position in the north of the Horn of Africa to join with Spanish frigate Infanta Elena, to take over the escort of a World Food Programme ship, then FS Aconit spotted a whaler towing a skiff. The long way off-shore location, nearly 600 km, and the absence of fishing activity raised the suspicion of Aconit's command and the order was given to intercept the whaler.

After the boarding team had been deployed, due to the short distance between the French frigate and the whaler, it took only a few minutes for them to intercept the pirate boat , which had 8 suspected pirates on board as well as piracy-related equipment (although some of it had likely been thrown overboard before the interception).The whaler and the piracy-related equipment were destroyed and the skiff was embarked on board the French frigate.

After a day's steaming to get closer to the Somalian coast, the 8 suspected pirates were released.

French frigate Aconit has again disrupted and made inoperative a pirate action group, thus preventing them from attacking vulnerable vessels in the Indian Ocean.