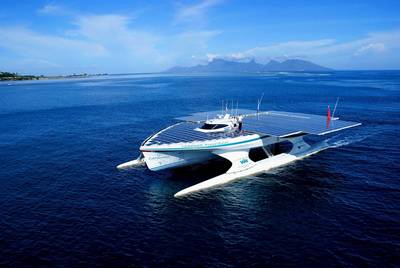 After completing the world’s first solar-powered journey around the world, 'PlanetSolar' has a marine science mission.

The unique ocean-going catamaran has found a new occupation for the New Year. PlanetSolar is intended to be the mode of transport for the Deepwater Project, a scientific mission led by the University of Geneva to collect data on the Gulf Stream’s behavior, the ocean current responsible for maintaining much of Europe’s temperate  climate.

The advantage of using PlanetSolar for such an expedition is that it’s emissions-free; it doesn’t discharge any exhaust fumes which can significantly contaminate measurements in the scientific experiment. Special technologies will be used to study the air at the ocean’s surface, the atmosphere in the region and the water, including micro-algae, plankton and other microorganisms, at different depths.

The Gulf Stream’s general flow is three-dimensional: a surface current bringing heat from the tropics to the Arctic, a return current at the depths of the ocean and a “source” of this movement. The source, however, is unknown and scientists are trying to locate the areas where the transition is abrupt in order to understand entire cycle of the Stream to better predict the consequences of any potential disruption of the flow.