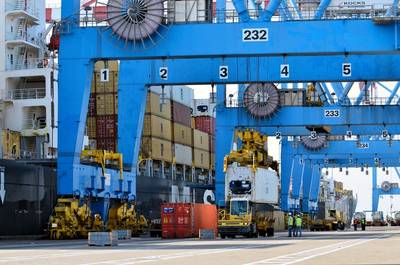 At least 17 ships were waiting to unload at Ashdod port, with another 14 lined up to come in. Ten were held up at Haifa port, with more ships due to come, spokesmen for the ports said.

Dockers protested by not coming into work, said officials at both ports, though cruise ships were still able to dock in Haifa.

The government, frustrated by labour disputes that have disrupted Israel’s trade arteries for years, gave the green light in 2013 to build new terminals next to the state-run ports of Ashdod and Haifa.

Union leaders, who have been negotiating with the government over new employment terms given the looming competition, were summoned to a labor court to discuss the strike on Thursday.

A spokesperson for Israel's labour federation, Histadrut, referred questions about operations to the individual port workers committees, who were not immediately reachable.

China’s Shanghai International Port Group will operate a private port in Haifa and Swiss-based Terminal International Ltd (TIL) will run a port to the south in Ashdod.

The government says the new ports will lower the cost of goods across the board.