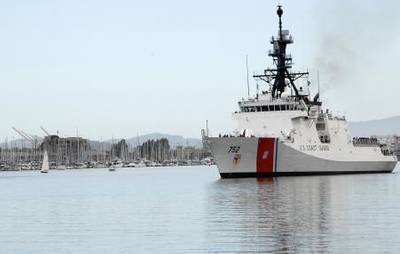 The Coast Guard Cutter Stratton returns to its homeport of Coast Guard Island in Alameda, Calif., after a two-month deployment, Saturday, Aug. 17, 2013. The Stratton completed a patrol to validate the ship's systems to ensure the crew and cutter are fully operational. (U.S. Coast Guard photo by Petty Officer 3rd Class Loumania Stewart)

Cashin is a native of Chelmsford, Mass., and has served aboard seven cutters, commanding three of them. He is a 1988 graduate of the United States Coast Guard Academy where he earned a Bachelor of Science in Civil Engineering. He also holds a Master of Public Administration from Harvard University and a Master of National Security and Strategic Studies from the United States Naval War College. Conducting operations across the globe, Cashin has experience with every Coast Guard mission including law enforcement, search and rescue, homeland security and defense operations. Prior to Stratton, Cashin served as Vice President Joe Biden’s Special Advisor for Homeland Security and Counterterrorism. Once relieved, he will serve as the Coast Guard Fellow at the Council on Foreign Relations in New York City.

Sugimoto reports to Stratton from Cleveland, where he served as Chief, Incident Management Branch of the Ninth Coast Guard District. His area of responsibly spanned the five Great Lakes, the Saint Lawrence Seaway and parts of the surrounding states, including 1,500 miles of international border. Sugimoto graduated from the U.S. Coast Guard Academy in 1990, where he received a Bachelor of Science in Government, and from the University of San Diego's School of Law in 2002. Sugimoto has more than 10 years of sea time with seven tours afloat, three as commanding officer assignments. Sugimoto’s other assignments include serving as Staff Judge Advocate for the Ninth Coast Guard District, practicing operational law for the Maintenance and Logistics Command Pacific Area as well as Command Duty Officer for the Eleventh Coast Guard District and the PACAREA Command Center.

The Change of Command Ceremony is a time-honored tradition which formally states to the officers and crew of the command the continuity of the authority vested in the commanding officer. This unique military ritual represents a total transfer of responsibility, authority, and accountability from one leader to the next.

Stratton returned from a three-month deployment Saturday, where the ship patrolled the waters of Southern California for illicit drug smuggling activity, conducted exercises and training, as well as operational testing and evaluation of the cutter’s capabilities.

U.S. Coast Guard Cutter Stratton, home ported in Alameda, Calif., is the Coast Guard’s third National Security Cutter, the latest of the Coast Guard’s Legend class, incorporated into the fleet to replace the more than 40-plus-year-old fleet of high endurance cutters. Stratton was delivered to the Coast Guard in September 2011 and commissioned into Coast Guard Service March 2012. Stratton and the other NSCs routinely conduct operations from South America to the Bering Sea in support of global security operations. The ship’s range, speed, and ability to operate in extreme weather conditions enable this platform to conduct counter-narcotics, homeland security, alien-migrant interdiction, living marine resource enforcement, search and rescue and other Coast Guard missions far from shore.