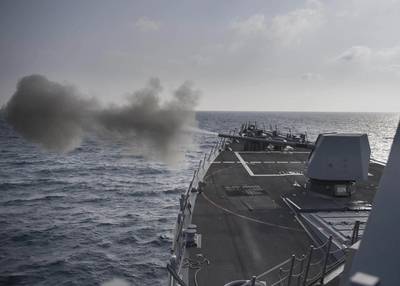 Following the release of new national security and defense strategies, the Navy is undertaking a new Fleet Structure Assessment that could alter its stated goal of a 355-ship fleet, senior service officials told Congress this week.

A new FSA would take a look at the mix of surface ships and submarine in the service and could change assumptions on the look and size of the future fleet, Vice Adm. Bill Merz, deputy chief of naval operations for warfare systems (OPNAV N9), told the House Armed Services seapower and projection forces subcommittee on Tuesday.
“We intend to do another FSA with the new National Defense Strategy. There’s a series of events that have to happen before we do the FSA, starting with the combatant commanders all the way down to the defense planning guidance that leads us to the scenarios we need to plan for,” Merz said.
The last FSA, issued in the last days of the Obama administration by Secretary of the Navy Ray Mabus, set the goal for active Navy ships at 355 from a 308 total from the previous 2014 FSA.
The 2016 FSA expressed a desire for higher-end ships like attack submarine and guided-missile destroyers and cruisers to the total. It added 16 large surface combatants, 18 attack submarines and an additional carrier over the 2014 plan.
Following the 2016 FSA, the Navy also commissioned a series of fleet architecture studies that Congress required the Navy to commission to study what a future fleet would look like.
“We have done multiple studies on the architecture of the Navy and the size of the Navy. Every single one of them says we have to grow, and we have to grow in these fundamental types of ships,” Merz said. “So we don’t expect much of that to change with the next FSA; maybe it changes on the margins, maybe another number we’re shooting for, but it’s going to be bigger than we are today, so we have to move out and we have to move out aggressively as we go forward.”
As of Wednesday, the Navy has a total of 282 battle force ships.
Chief of Naval Operations Adm. John Richardson told USNI News the effort would be part of a new naval strategy document related to the recently released National Defense Strategy that focuses on China and Russia as likely adversaries in a new age of great power competition.
“We have a new National Security Strategy, a new National Defense Strategy and we’ll be putting out a naval component to that National Defense Strategy out here shortly. And [with] the rise of this great power dynamic, or the acknowledgment of it, it seems to make sense to take a look at that Force Structure Assessment,” Richardson said. “We’ll get to it. Hard to say. The force structure assessment did account for a resurgent Russia and it accounts for a rising China. So it wasn’t completely uninformed with the current dynamic and so we’ll have to take look at.”