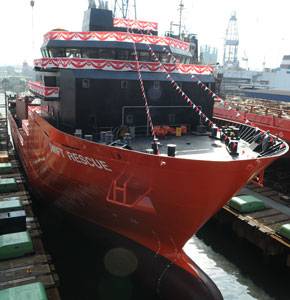 ST Marine had conceptualized, designed and built Swift Rescue to enable it with the primary capability of submarine rescue as well as fulfill other secondary roles. This 279 ft by 59 ft vessel is highly maneuverable with excellent sea-keeping capabilities. Equipped with a DPS-2 dynamic positioning system, it also incorporates a helicopter deck and unique operational spaces to meet the requirements of the Republic of Singapore Navy (RSN). It will house a highly sophisticated Submarine Rescue Vessel (SRV) to rescue personnel from a submarine in distress up to a depth of 1,640 ft.

ST Marine had announced in June this year of a joint venture (JV) agreement with James Fisher Defence Limited (JFD), a wholly-owned subsidiary of James Fisher and Sons Plc, to form First Response Marine Pte. Ltd. (FRM).  FRM is a 50:50 joint venture company set up for the sole purpose of undertaking the approximately $400m contract awarded to ST Marine by the Republic of Singapore Navy (RSN) for the provision of a ship and submarine rescue system and maintenance services. The contract award was announced in March last year. The 20-year services contract is expected to commence in 1H 2009, when the SSRV and SRV have been completed and integrated into a submarine rescue system.