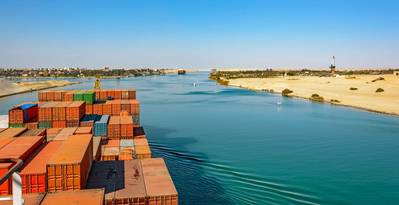 Transits through the Suez Canal, the beating heart of the Egyptian economy, have stayed remarkably resilient to the fallout of the COVID-19 pandemic if judging by total transits of the three commercial shipping sectors which are up 8% year-on-year. This is despite bleak economic growth prospects world-wide following the pandemic, and highlights that shipping remains the backbone of the global economy.

It is often said that a picture says more than 1,000 words, but 6,166 ship transits in the Suez Canal can certainly also tell an interesting tale. Data from Leth Agencies and the Suez Canal Authority highlight that in the first five months of 2020, oil tanker and dry bulker transits in the Canal are all up considerably, while the harsh conditions in the container shipping market have limited containership transits.

“The shipping industry remains at the center of the global economy and facilitates much of our everyday life as we know it. Faced with a humanitarian and economic crisis on a seemingly unparalleled scale, the activity of the merchant fleet has remained surprisingly resilient to strong headwinds with rising transits in the Suez Canal in the first four months of 2020,” says BIMCO’s Chief Shipping Analyst, Peter Sand.

A chaotic first half
In the first half of 2020, shipping markets have experienced extraordinarily chaotic conditions. The COVID-19 pandemic has ravaged global economic growth, which BIMCO expects to translate into declining demand across all the shipping markets.

This negative outlook is echoed by the World Bank which estimates that world trade will decline by 13.4% in 2020, the largest decline since World War II, and exceeding the 10.4% drop seen in 2009 by some distance. 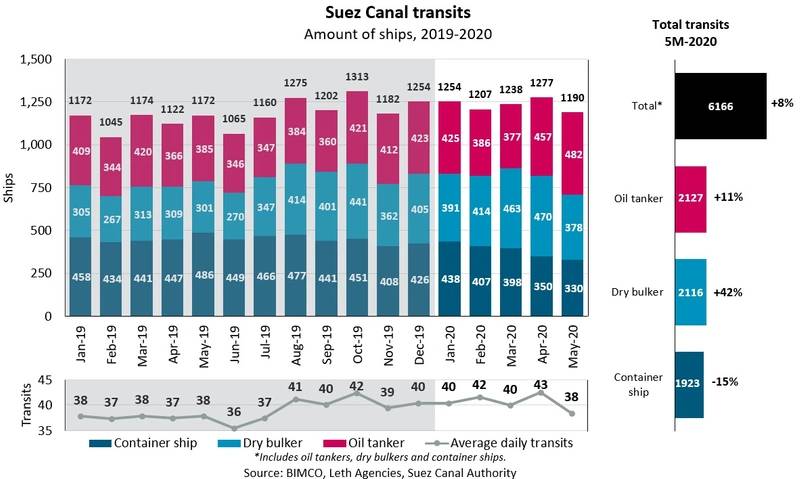 The increase in oil product tanker transits is likely explained by the increased demand for IMO 2020 sulphur cap bunker fuel reshuffling, but also the outbreak of the OPEC+ oil price war which sent earnings skyrocketing and likely increased fleet productivity.

In May 2020, 390 oil product tankers passed through the Canal, 233 of which were Medium-range (MR) and Handysize tankers.

Data from the Suez Canal Authority highlight that 82% of the bulker transits in 2019 were in laden condition, of which 73% went southbound. On the ballast voyages, 99% of all transits were northbound. Evidently, bulkers primarily transit through the Suez Canal laden in the Southbound direction, often carrying dry bulk cargoes for the Middle East or Asia, while it is less common to transit through while ballasting.

What lies at the root of the increased bulker transits remains somewhat of a puzzle considering the hardship that dry bulkers have faced in the first five months of 2020. Part of the explanation could lie at the rebates extended to dry bulkers, but also the IMO 2020 sulphur cap which, in the initial months of 2020, hiked up bunker fuel costs and encouraged shorter sailing distances to save on bunkering costs. 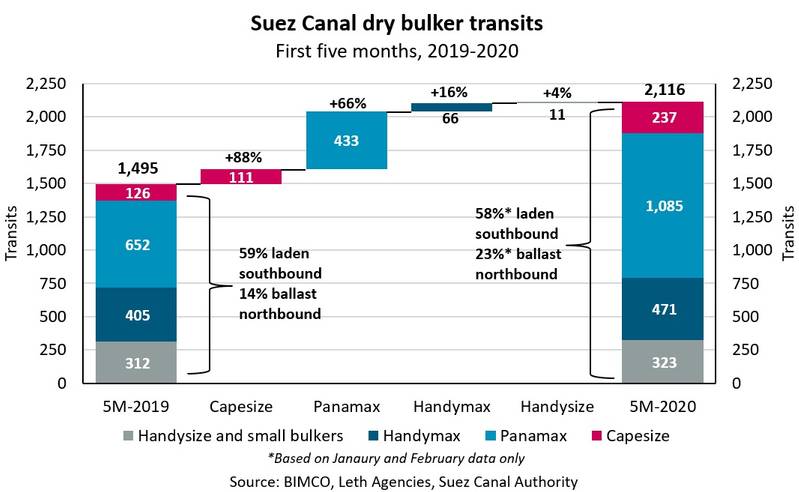 Sailing around the Cape of Good Hope in bleak times
While containership spot rates would suggest that times are merry in the container shipping business, this is far from the truth. The container shipping segment has been battered by the COVID-19 pandemic in what can be regarded as a three-fold beating.

First, the lockdown of China and intra-Asian supply chain disruptions impacted volumes in February and March. Secondly, as the virus spread beyond Asia and became a pandemic, it immobilized populations and limited consumer spending along the way.

Thirdly, looking ahead at the medium-term, economies around the world will struggle with structural damage, including mass unemployment, slowing output and lower consumer confidence. This is likely to drag on container volumes and inhibit any quick recovery for container shipping demand.

Containership transits through the Suez Canal provide credence to this bleak outlook with total transits down 15% year-on-year. Transits have been faltering continuously since January, where carriers started to restrict container ship capacity by blanking sailings. The blanked sailings have consequentially pushed the idle fleet to record-breaking levels in recent months, with the latest reading at 11.6% on 25 May 2020 (source: Alphaliner). Consequently, transits of container ships in the Suez Canal have dropped by 32% year-on-year in May to settle at an all-time low of 330.

“The idle containership fleet has remained at record-breaking levels through a solid portion of 2020, with container ship transits through the Suez Canal reflecting the widespread blank sailings, dropping 32% year-on-year in May.

Container carriers are stuck between a rock and a hard place, where high container spot freight rates must be sustained by massively restricting capacity on the market. Escaping this requires a substantial pick-up in demand,” says Sand.

As the fleet upsizes, Suez Canal transits decrease
Adopting a broader perspective and studying the past decade it is apparent that container ship transits have been steadily declining. Average monthly containership transits through the Suez Canal peaked in 2011 at 602 transits per month, at that time the largest of the three main segments, only to decline to a low of 437 in 2016. Nonetheless, 2020 might just be the year that ends up taking the crown in terms of the lowest number of monthly containership transits, with a monthly average of just 384 transits in the first five months of the year.

The relentless pursuit of achieving cost reductions through economies of scale in the container shipping industry partly explains this downward trend of transits. As ever-larger containerships are delivered to the market, a cascading effect of the fleet occurs, where smaller ships are removed from the Asia-Europe trade lane and larger ships are inserted instead. This cascading effect will nominally decrease the number of containership transits through the Suez Canal, even as total TEU transported in the waterway increase.

“In the past decades, economies of scale have been reaped extensively by container carriers. This upsizing of the fleet will decrease the number of ships on the main trade lanes, even as the total amount of containers transported increases. In turn, this explains the declining Suez Canal container ship transits over the past decade,” says Sand. 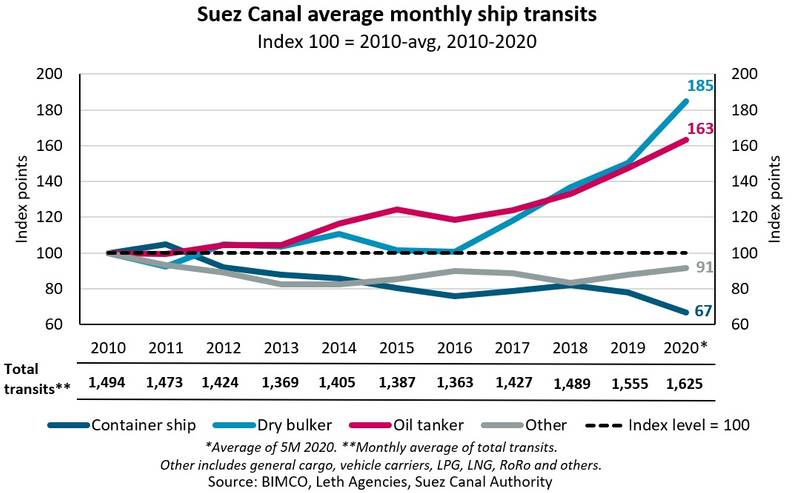 In the past decade, the developing nations in Asia have been one of the main growth drivers for seaborne imports, a trend which is reasonably expected to continue in the upcoming decade. Assuming the global economy gradually recovers from the shock of the COVID-19 pandemic and that protectionist walls are not built much taller, it is likely that world trade will continue to grow, much to the benefit of the Suez Canal.