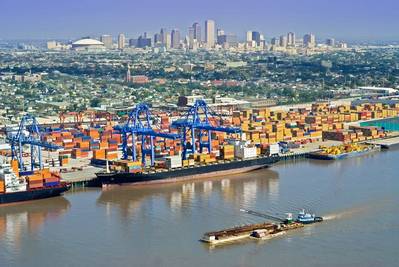 The America’s Marine Highways Program is one of several grant programs administered by the U.S. Maritime Administration (MARAD) to promote more effective use of the nation’s navigable waterways. This particular program was established by Congress in 2007 to provide grants for projects that would promote water-borne alternatives to available landside transportation services, especially for freight carried by trucks.

Consistent with this specific goal, the program’s statutory authority limits eligible projects to those that either mitigate landside congestion or promote “marine highway transportation.” “Marine highway transportation” is given a very specific meaning in the statute. It is defined to encompass only cargo carried in a U.S. documented vessel that is:

At the time that the program was created, very little cargo was being carried in “marine highway transportation” as defined by the statute. Despite MARAD’s best efforts to implement and promote the program, the program has enjoyed only limited success. The first grants under the program were made by MARAD in FY 2010. Since then, a total of 40 grants have been made to 24 eligible projects through FY 2021, for a total of approximately $46.5 million.

Nearly all of the projects funded by the program have been for transportation of eligible “wheeled” cargo over relatively short distances, the most successful of which have been the container-on-barge service between Hampton Roads and Richmond on the James River, a distance of about 95 miles, and the container-on-barge service carrying resin pellets from Baton Rouge to New Orleans for export, using empty containers brought from Memphis. Some projects were pilot projects that did not become permanent operations.

It would be fair to say that it has been a challenge to get cargo off of the roads and onto the river, worthy as such a cause may be. There are a number of reasons for this, not the least of which is a lack of funding. In some years the program did not receive any annual appropriations. The Infrastructure Investment and Jobs Act (IIJA, sometimes called the Bipartisan Infrastructure Act) designated $25 million for the program in FY 2022, which stands in sharp contrast to the $2.25 billion over five years that IIJA designated for MARAD’s Port Infrastructure Development Program.

Another reason is that the inland waterways are very efficient for carrying bulk cargo, both dry and liquid, so there is a natural incentive to continue using them in this way, and to design and operate ports and terminals for this use. The kind of cargo that is eligible for grants under the Marine Highways Program needs very different equipment and landside facilities than those used for bulk cargoes. Without having this special cargo to be handled, ports and terminals on the rivers do not have an incentive to acquire the equipment and make the space needed to handle it. On the other hand, without the facilities on the rivers available to handle such cargo, shippers do not have an incentive to use the rivers to transport it.

It has been suggested that expanding the Marine Highways Program to include bulk cargoes would create more interest in the program, which in turn would support the case for increasing the funds available for it. This has been raised in discussions of what should be included in the next Water Resources Development Act (WRDA), which the industry is hoping will be passed this year in keeping with the two-year cycle of such legislation. This would require a fundamental shift in the orientation of the program, which might not be feasible as a practical matter, despite the bipartisan support that waterways programs enjoy in Congress.

On the other hand, a hybrid approach might be possible. This could be, say, allowing grants to be made for projects that are for the transportation or handling of bulk cargo, so long as the project also includes a “wheeled” cargo component. It could be analogous to providing funds to build a parking garage so long as it includes charging stations for electric vehicles.

Just as there is a natural reluctance on the part of ports and terminals to make the changes necessary to handle “wheeled” cargo, so also there is reluctance on the part of shippers to employ a means of carrying their products with which they are unfamiliar and about which they have concerns of reliability and timeliness. A concerted effort by MARAD to educate the shipper community and to alleviate their concerns could be helpful in this regard. The next WRDA could be used to give MARAD a mandate—and funding—to undertake such an effort, or to make grants to others to do so, whether as part of the existing Marine Highways Program or as a new program.

Another idea that has been recently discussed is the creation of a federal advisory committee, formed under the Federal Advisory Committee Act, in which ports, carriers, and shippers would work with MARAD specifically on the mission of moving cargo from the roads to the rivers.

There is already a U.S. Maritime Transportation System National Advisory Committee (MTSNAC), and its charter of September 17, 2020 states that the objective of the committee is “to identify and seek solutions to impediments hindering effective use of short sea transportation.” However, the minutes of the committee’s meetings and its recommendations to the Secretary of Transportation and to MARAD reflect that in fact its attention and deliberations encompass a much wider array of topics. The following are a few examples from a MTSNAC memorandum of September 29, 2020 of the 32 actions that MTSNAC recommended be taken by the Secretary of Transportation:

According to the MTSNAC website its 28 members include representatives of international ocean carriers, deep water container ports, shipyards, and international labor unions. All of these interests are appropriate and indeed necessary for the broad scope of topics that MTSNAC actually deals with in practice, but they have at most only a tangential relationship to what are the real impediments to greater effectiveness of the Marine Highways Program in fulfilling its original mission.

A more apt model would be the Inland Waterways Users Board (IWUB) which monitors the Inland Waterways Trust Fund and makes recommendations to the Army Corps of Engineers and to Congress on investment priorities using resources from the Fund. IWUB is comprised of 11 representatives of shippers and carriers who represent a balance of navigation industry interests, companies of different sizes, and a variety of waterborne commodities. The compact size and specific focus of the IWUB have made it an effective and efficient collaboration between the Corps of Engineers and the users of the inland waterways. The creation of a similarly sized and focused committee to advise MARAD on the Marine Highways Program would be another suggestion for the next WRDA.

The Marine Highways Program has the potential to play a much larger role in moving cargo from the roads to the rivers than it has achieved so far.