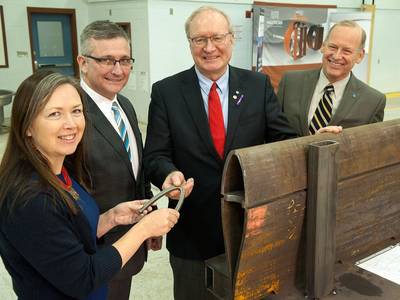 A former Montague resident, Elizabeth Reynolds Boyd has always been looking for a way to give back to her home province. The respected naval architect and owner of Nautican Research and Development joined Premier Wade MacLauchlan and Babcock Canada Vice President Jake Jacobson to announce a new advanced marine technology presence in Summerside.

The Nautican, Babcock, and provincial partnership province will bring a manufacturing facility and 21 new full-time jobs over the next three years – joining the six employees already on staff – to Slemon Park.

With the support of Babcock, Nautican will establish a manufacturing and integration facility in Prince Edward Island to produce high-efficiency marine propulsion products. These products incorporate high-performance hydrodynamic solutions to maximize power while reducing fuel consumption.

In supporting the growth of the marine sector, the provincial government will help Nautican establish this new manufacturing facility by providing labour rebates for new positions and a lease rebate.

“The addition of Nautican’s new facility to the province’s advanced marine technology cluster helps us increase our exports and create quality, full-time jobs for Islanders,” Premier MacLauchlan said. “The province is committed to expanding the marine technology sector, and we have worked together with the industry to create a very attractive environment for these companies right here in Prince Edward Island – a place that some might not expect.”

Babcock Canada is providing Nautican with a significant investment to purchase the equipment for its new manufacturing facility. In return, Babcock will receive Industrial Technological Benefits (ITBs) from the future sales of Nautican products that will be used to meet Babcock’s commitments to the Government of Canada on the Victoria Class Submarine In-Service Support Program.

As part of any major Canadian defense contract, companies must undertake business activities in Canada equivalent to 100 per cent of the value of the contract that they hold with the federal government.

Babcock selected Nautican to receive this investment due to the commonality the two companies share in their products and skills. In addition to the investment in Nautican, Babcock will support and guide Nautican in manufacturing setup, process development, and financial and project management.

The advanced marine technology sector has grown rapidly on Prince Edward Island over the last three years; sales have risen from just $7 million in 2013 to over $76 million in 2015. More than 150 Islanders work in the industry, which represents approximately 8 per cent of total provincial exports.