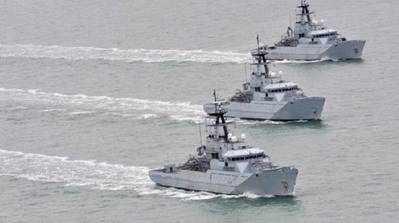 BAE say that work is underway on the new £22m contract to support and provide maintenance to the Royal Navy’s River Class Offshore Patrol Vessels (OPVs).

Following a successful track record of supporting these Portsmouth based ships for over a decade and after a competitive tender process, BAE Systems was awarded the contract in September, 2013 guaranteeing the work for the next five years.

The maintenance contract will provide the Royal Navy with 320 operationally available days per ship per year. This will enable the ships to remain at sea as much as possible to carry out their primary roles of fishery protection, environmental protection, search and rescue and maritime security.    The success of these arrangements will be based on a strong partnering relationship between BAE Systems, Ship’s Staff, the MOD, and A&P Group who play a key role in the maintenance of the ships.

Related U.S. BAE News
BAE Systems Hawaii Shipyards, Honolulu, Hawaii, has been awarded a $37,439,506 not-to-exceed, firm-fixed-price contract by the US Department of Defense, Navy, for the fiscal 2014 dry-docking of the USS Chung Hoon (DDG 93).

San Francisco Bay Area boatbuilder Moose Boats said it has recently delivered an M1 – 46 to the State of California’s Department of Fish and Wildlife.