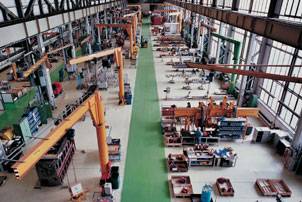 The work done at Catepillar’s Kiel Engine Center in Kiel, Germany, during the manufacturing process for MaK and Cat engines up to 16,000 kW is now being recognized through an environmental protection award. In June, Caterpillar Motoren, the manufacturing arm focused on the production of MaK and Cat engines for marine, petroleum and power generation applications, was awarded an Environmental Award from the Economic Association of Schleswig-Holstein, the northernmost state in Germany.  Specific actions noted by the nomination team for the award include changes to many of the buildings at the Kiel Engine Center, such as the installation of new cooling towers and replacement of lighting systems, both of which resulted in significant energy savings.  For example, because all engines manufactured in Kiel are fully tested before shipping to the customer, the cooling system on the testbed is a vital process which requires a great deal of energy.  A project was completed to automate the cooling process so that the previous manual control was replaced to individually cool the engine as necessary during different load ranges during the testing, thus aligning the cooling with actual demand.  This work has already amounted to an annual CO2 reduction by 525 tons or 58 percent less energy consumption of the cooling system.