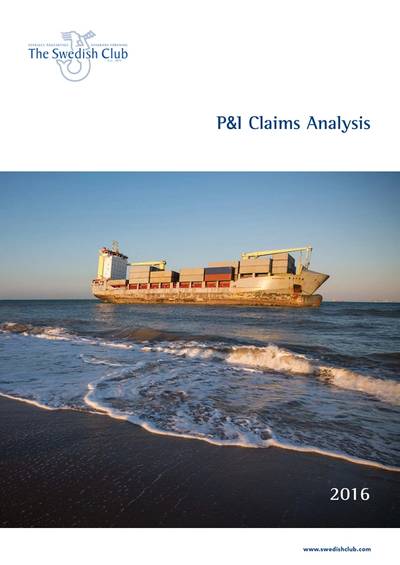 The life of seafarers is never straightforward, and as a new report from the Swedish Club shows, the hazards and job complexities they face are very much dependent on the type of vessel they find themselves crewing.

In P&I Claims Analysis, published this week, the Club has studied thousands of incidents in the last ten years, across a range of vessel segments and claims types, and made some interesting discoveries.

Seafarers on containerships needs to watch their step, as almost 60% of all slips and falls occur on container vessels – almost certainly due to the amount of debris on board and the number of people involved in cargo operations.

Meanwhile, those working on bulk carriers must take care to avoid cargo damage, with bulk carriers recording both the highest average cargo claims cost and also the most frequent claims over the last ten years. A failure to check cargo properly before loading and improper cargo handling are the cause of the most expensive and most common claims respectively, emphasising how important it is for crews to monitor entire cargo operations to secure as much evidence as possible about damaged cargo.

With the various vetting processes in place, it is no surprise that tanker claims make up the smallest proportion of cargo claims seen by the Club. But those on board cannot rest on their laurels with around 60% of claims and the same proportion of costs incurred by improper cargo handling and insufficient cleaning.
The report also highlighted both an increase in claim costs and a rise in the number of claims for the most common P&I claims: cargo, illness and injury, over the last ten years. Worryingly, the Club has seen a rise in the number of claims for all vessel types.

Bulk carriers top the charts, with the greatest increase in the number of claims. This trend is also being seen in the container sector, with both the cost per claim and the number of claims rising. The frequency and cost for tankers is the lowest of the three types.

Lars Malm, Director, Strategic Business Development & Client Relations at The Swedish Club says, “With the pressures faced by today’s crews, and based on the findings, we actively encourage and advise all members to participate in the Maritime Resource Management courses run by The Swedish Club Academy, which aim to enhance safety at sea.”

Cargo
The proper treatment of cargo seems to prove a challenge across all market sectors: by far the most frequent claims are for improper cargo handling, making up over 30% of the total claims. At the same time the most expensive claims come from the problem of inherent vice - when cargo has been contaminated or not in a proper condition when loaded.

Illness and injury claims
Statistics show that slips and falls are the biggest concern on all three types of vessels studied, causing over 44% of claims and making up the same percentage of costs.  The frequency for injuries has increased substantially since 2012, with the locations on board where most injuries occur being the cargo deck areas, machinery room and open deck areas. Most injuries happen during routine maintenance which normally requires a work permit and risk assessment.

Whilst average claims costs for injuries have been relatively stable, there has been an increased frequency – possibly explained by a greater awareness of the right to make a claim and the level of financial compensation available.

Again the frequency of illness claims has remained somewhat stable, but the Club has seen a steady rise in the average cost of illness over the past ten years across all categories. The reason for this may be increased medical cost and older crew, which need more medical assistance.