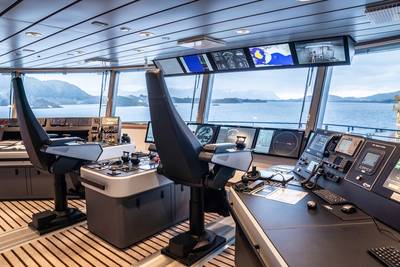 Built at Ulstein Verft shipyard, Lindblad Expeditions Holdings, Inc. took delivery of the National Geographic Resolution in September 2021. Along with its sister ship National Geographic Endurance, this is the second vessel in a series of two explorer vessels to have Ulstein signature X-BOW, the inverted bow concept combined with Wärtsilä’s integrated bridge and navigation system.

Along with military-grade infrared cameras that allow to easily spot wildlife and ice ahead of the ship, the solution includes one S-band and two X-band radars integrated into the Nacos Platinum system to provide 360° situational awareness capabilities that allow the captain and the crew to concentrate on their primary task – safe navigation. The system also includes an Integrated Ice Radar System.