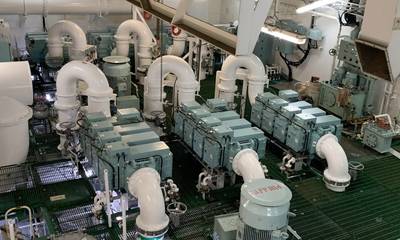 South Korean ballast water management systems (BWMS) manufacturer Techcross said orders for its systems are "soaring" in line with the improvements in the global shipbuilding market. The company said it sees business picking up in China, Japan and especially Korea, with good performance in high value-added vessels such as very large cruse carriers (VLCC) and liquefied natural gas (LNG) carriers.

The company credits its success to product performance and various installation performances, as well as the ability to meet the delivery schedule, particularly as production capacity and installation schedule are becoming an important issue due to the current surge in BWMS orders globally. Techcross' largest plant in Busan, capable of producing more than 3,300 units per year, is a big advantage for domestic shipyards, the company said.

Techcross' outlook for orders in the second half of the year is bright, and the company expects to achieve record-breaking performance this year, exceeding the previous year's sales of 230 billion won ($196.4 million).

As of August, Techcross is participating in tanker and LNG carrier projects including VLCCs in domestic shipyards, which are currently underway in South Korean shipyards.

Cox Marine, a British manufacturer of high-powered diesel outboard engines for the global marine industry, announced it has…