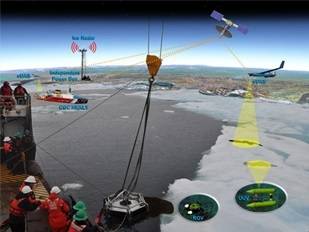 RDC personnel and partners will build on prior Arctic research projects including the 2012 deployment of a skimmer designed for recovering oil from ice off the coast of Barrow, Alaska. U.S. Coast Guard illustration.

The U.S. Coast Guard Research and Development Center (RDC) plans to test and evaluate oil spill detection and recovery technologies in the Arctic Ocean as part of Operation Arctic Shield 2013. A multi-agency team of engineers and scientists led by RDC researchers will conduct a series of demonstrations in September aboard Coast Guard Cutter Healy to test and evaluate capabilities of various unmanned aerial systems (UAS), an unmanned underwater vehicle (UUV) and a remotely operated vehicle (ROV) to search for simulated oil spills.

“This analysis builds on several years of oil in ice work, unmanned systems evaluations and underwater research conducted by the RDC, including a series of winter tests previously conducted in the Great Lakes,” stated Rich Hansen, the Arctic coordinator at the RDC and chief scientist for this mission. “It is quite an accomplishment to bring together this multi-agency team with such a wide array of experience and expertise.”

Capt. Alan Arsenault, the RDC’s commanding officer, added, “These organizations have been great to work with, and the RDC anticipates future Arctic technology collaboration like this one that will include involvement by both public and private sector partners.”

To support planned UAS testing, the RDC has assembled a team to include National Oceanographic and Atmospheric Administration (NOAA) personnel operating a Puma UAS; University of Alaska, Fairbanks researchers operating Puma systems funded by The Center for Island, Maritime, and Extreme Environment Security; representatives from the Department of Homeland Security Science and Technology Center of Excellence and personnel from the U.S. Air Force Special Operations Command.  The team will also assess the capabilities of the UAS to support other Coast Guard operational missions while onboard the Healy.

Tests will also include operation of a SeaBED UUV by Woods Hole Oceanographic Institute (WHOI) researchers. The UUV involvement is part of a research effort funded by the Bureau of Safety and Environmental Enforcement (BSEE). Members from BSEE have been working with WHOI researchers to establish methods to detect, measure, and map oil under, or encapsulated within, Arctic sea ice. Tests will build on work that has been performed by BSEE to evaluate several candidate sensors to establish a sensor suite capable of detecting and quantifying the thickness of oil from below the ice. The emphasis during this evaluation will be on system deployment and recovery, two-way communication, ice-bottom mapping and search pattern development.

NOAA personnel will also employ the Environmental Response Management Application online mapping tool that integrates both static and real-time data for use during the exercise. The Coast Guard is providing one of its brushed skimmer systems to simulate recovery operations at the ice edge and a Video Ray PRO 4 ROV to provide a vantage point from below to observe and document skimming operations.

Coast Guard Cutter Healy, commissioned in 2000, is the nation’s newest and largest polar icebreaker.  The cutter is 420 feet long and has extensive scientific capabilities.  Homeported in Seattle, the cutter’s primary mission is scientific support, and as a Coast Guard Cutter, it is capable of performing critical Coast Guard missions, including search and rescue, ship escort, marine environmental protection, and the enforcement of laws and treaties in polar regions.

Arctic Shield 2013 is an operational exercise being conducted by the Coast Guard’s 17th District, which highlights the Coast Guard’s plans to protect the maritime community in the Arctic and to strengthen partnerships with federal, state, local, tribal and community members. This operation gives the Coast Guard an opportunity to exercise its capabilities to ensure the organization has the right resources to conduct Arctic operations.

The Research and Development Center is located in New London, Conn., and is the Coast Guard resource for scientific knowledge and capabilities, providing innovative and adaptive research, development, testing, evaluation, analysis, and technology solutions for the maritime environment to enhance current and future asset acquisition and mission execution.