Construction of what has been described as the world's largest civilian/NGO hospital ship - the Global Mercy - is making progress and is nearing completion in China.

Mercy Ships, an NGO which ordered the ship to deliver free healthcare services to those with little access in the developing world, and Stena RoRo, which leads the construction of the Global Mercy, on Tuesday shared a timelapse video of the construction along with the photos of the vessel in the shipyard in China.

"The Global Mercy will be a true modern marvel—a fully custom-built hospital ship with customized instruments, state-of-the-art technology and highly-trained talent of a modern hospital," said Rosa Whitaker, president of Mercy Ships. "It also represents a unique call-to-action for anyone called to serve, and it presents the opportunity for people to use their skillset to positively impact global healthcare."

Mercy Ships has cited the Lancet Global Surgery 2030 Report, according to which an estimated number of 16.9 million people die yearly due to lack of access to surgical care. Over 93% of the population of sub-Saharan Africa do not have access to safe and timely surgery. 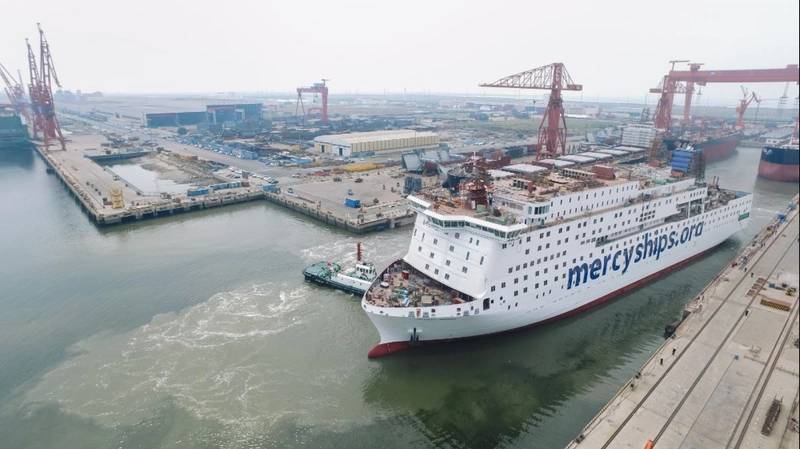 "As COVID-19 threatens the stability of already fragile healthcare systems globally, the need to provide basic life-saving care is greater than ever, especially in low-to-middle income countries. The Global Mercy will deliver a safe and clean environment to various African nations, providing help and resources from some of the most well-trained physicians in the world. Over the vessel's 50 year expected lifespan, it is estimated that more than 150,000 lives will be changed onboard through surgery alone," Mercy Ships said.

In addition to providing surgeries, the Global Mercy will be outfitted with training spaces including a simulation lab with virtual and augmented reality, mannequins and other training tools, and simulated post-op care space, which allow trainers to simulate local conditions and limitations in order to teach best practices in low-resource environments.

The 174-meter, 37,000-ton ship will have six operating rooms and house over 600 volunteers from around the world representing many disciplines including surgeons, maritime crew, cooks, teachers, electricians, the host staff, and more. The ship will also feature a 682-seat auditorium, student academy, gymnasium, pool, café, shop and library – all of which have been designed to accommodate up to 950 crew onboard when docked in port.

The Global Mercy will join the current flagship Africa Mercy, more than doubling the impact of volunteers and services provided by the charity.

Mercy Ships, which ordered the vessel, expects it to enter service by the end of 2021, after transport to Africa. 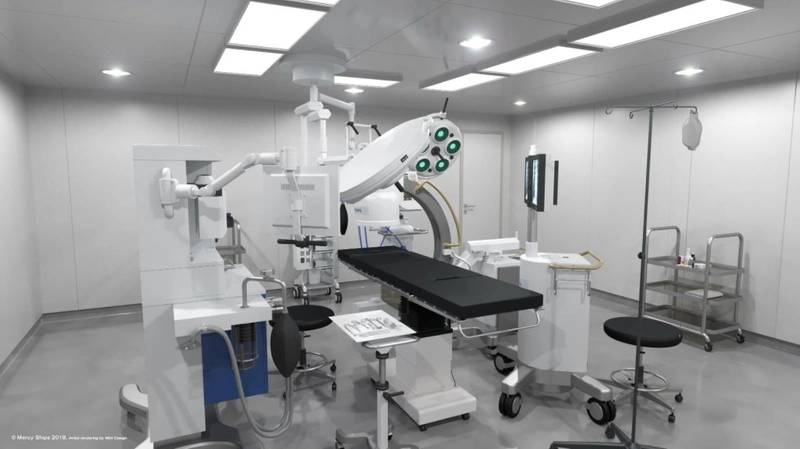 Swedish shipping compay Stena RoRo has been responsible for the design, the contracting, and the construction oversight of the vessel. In addition to the Chinese shipyard the project includes several European, American and Asian subcontractors.

Stena RoRo said:"The Global Mercy - the world's largest civilian hospital ship - has been a very special project for Stena RoRo, and after several years of design and construction the ship is now soon to be ready and leave the Tianjin Xingang shipyard in northern China."

Per Westling, CEO of Stena RoRo AB said, "We have applied one of our concepts on a ship from the RoPax-class, which are passenger and freighter vessels for international voyages, and modified her into a pure passenger ship with hospital capabilities."

"Instead of a car deck, we've built operating rooms and hospital wards. The ship will have space for about 950 persons with everything needed for both patients and those who work onboard, including grade schools and nursery schools for the children of staff," he said.

According to Stena RoRo, the ventilation system has been specially adapted and focus has been placed on minimizing vibration and noise.

The ship is equipped with large cranes in order to be able to take on containers with provisions, vehicles and other equipment as the ship is to be used for long periods in port.

"It feels very satisfying to be able to contribute with our expertise in this project, which will make such a big and important difference to so many people in the poorest parts of the world. Mercy Ships is doing a fantastic job," says Per Westling, who visited the current hospital ship, the Africa Mercy when she was stationed in Madagascar in 2017.

After completion of the ship in the first quarter of 2021, followed by an equipping phase in the Philippines, Mercy Ships expects the Global Mercy to arrive at a port in Africa for its first mission in the latter part of 2021.