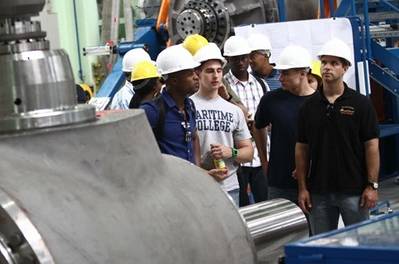 Wärtsilä hosted the State University of New York, Maritime College and its Cadets on board the College’s training ship, the Empire State VI during their mid-July visit to Trieste, Italy. The students were part of the second term of the annual 2013 Summer Sea Team. The ship’s visit to the historic city was no ordinary port call.

Upon arrival of the ship in Trieste’s harbor, leaders from Wärtsilä  welcomed the group of close to 600, including Maritime Cadets, a contingent of Cadets from Maine and Texas Maritime Academies, faculty, crew and SUNY Maritime College President, RADM Wendi B. Carpenter, USN (Ret.).

Wärtsilä and SUNY Maritime leadership had been making plans for many months for the Ship to visit Trieste, and while in port, a tour of the company’s workshop was planned.

The two vital forces of the maritime world have been working together since 2011 when Wärtsilä donated a state-of-the-art diesel engine to the College, creating a diesel engine lab for engineering students.  In May, 2013, SUNY Maritime honored Wärtsilä at the College’s annual Admiral’s Dinner.

Once in Trieste, Admiral Carpenter joined 100 Engineering Major Cadets, as well as Dr. Richard Burke, SUNY Maritime’s Chairman of the Engineering Department, for a four-hour guided tour of the Wärtsilä multi product factory.  During the visit, the students also had the opportunity to meet with several Wärtsilä leaders.  The following day, Wärtsilä managers arranged a meeting between Maritime College President, Admiral Carpenter and the College’s Engineering Chairman, Dr. Richard Burke, with fellow educators at the University of Trieste.

“Our visit in Trieste and tour of the Wärtsilä manufacturing facility was a unique opportunity for our students and faculty to experience, first-hand, the numerous elements involved in the production of a Wärtsilä engine. Equally as important, they saw the inner workings of a multi-national company with enormous impact,” stated SUNY Maritime College President, RADM Wendi B. Carpenter, USN (Ret.).

Before the ship departed for Malta, SUNY Maritime hosted a celebratory on board reception.  Well attended by Wärtsilä and the University of Trieste leadership, as well as local officials from the historic city whose harbor has been visited by mariners from all parts of the world for thousands of years, it was a fitting close to the Empire State’s time in Trieste.

For the Cadets, visiting the Wärtsilä factory in Trieste, regarded as one of the finest facilities in the world, was a once-in-a-lifetime opportunity.  The Empire State VI will return to the SUNY Maritime College campus on August 9 and the start of another new academic year will begin several weeks later.