PlanetSolar Betters its Own Transatlantic Record 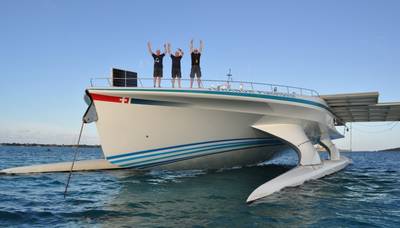 The solar-powered vessel has recently sailed the 2,867 miles from Las Palmas to St. Martin, French WI, at an average 5.3 knots to break the earlier record.

During the trip around the world (2010-2012), the MS Tûranor PlanetSolar sailed for 26 days from one side of the Atlantic to the other, thereby claiming the world record speed for a solar-powered transatlantic crossing and her first entry in the Guinness World Records™. It hasn’t been broken since. It was not until 2013 that the largest solar boat in the world repeated the trip to realize a new global accomplishment: 22 days, 12 hours, and 32 minutes.

During the transatlantic crossing, the crew encountered phases of substantial cloudiness for several consecutive days, and regularly had to optimize their route. The MS Tûranor PlanetSolar’s captain, Gérard d’Aboville, explains that “it was necessary to make a significant deviation to the south, which increased the travelling distance by 7%, but enabled us to avoid winds and unfavorable swells.” Furthermore, the ship’s energy consumption had to be carefully managed in order to maintain an efficient speed and reach St. Martin in less than 26 days.

It is with great pride that the crew set foot on dry land after 22 days at sea: “Once again, the boat provided a brilliant demonstration of solar energy’s potential by breaking its own speed record for a transatlantic crossing set in 2010, improving it by 4 days, 6 hours, and 38 minutes. It is difficult to compare the two crossings because they were conducted at very different times of the year. But it is certain that in light of the lessons learned during the trip around the world, the major maintenance projects carried out last winter – particularly to the propulsion system – have greatly improved the ship’s performance.

She will now travel to Miami to begin her second life as part of an exploratory mission along the Gulf Stream current conducted by the University of Geneva,” said Gérard d’Aboville.