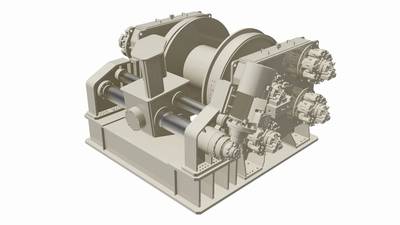 Shaver Transportation of Portland, OR, operating vessels within the Columbia River region of the Pacific Northwest for over a hundred years, has selected Rapp Marine as the supplier of the two heavy-duty load handling winches on their latest tugboat.
Rapp Marine has almost two decades of experience of designing and delivering rugged winches for workboat market, and has been around as a company for over a hundred years as well. The latest tugboat to the Shaver Transportation fleet is designed by Jensen Maritime of Seattle, WA and is under construction at Diversified Marine of Portland, OR.
The tugboat will be equipped with two primary winches, the single drum bow hawser winch and the stern double drum tow winch. The bow hawser winch will be used for ship assist and escorting duty on the Columbia River and out at sea, with the sturdy design capable of full render and recovery up to 100 Metric Tons. This design is out of necessity in order to operate within Columbia River bar, which is notorious for having some of the roughest sea conditions within U.S. waters. The winch will be powered by one C32 Caterpillar Engine or during smaller lighter jobs smaller generator engines will be supplying the power. Two robust multiple motor gearboxes provide the speed and torque necessary for the active render and recovery, and the winch features sturdy band brakes that are designed to hold up to 250 metric tons of tension. The winch also features an electrically driven level wind that will allow for easy, on-the-fly adjustment of the fairlead during operations.
The double drum tow winch on the aft of the vessel features drums designed to hold either steel wire rope or synthetic rope, depending on the requirement for the application. The winch is designed for a variety of applications, including emergency tow situations and long haul towing. Each drum is independently driven by separate gearboxes with multiple hydraulic motors that are capable of pulling 74.5 Metric Tons on the first layer. The sturdy band brakes for each drum will be able to hold up to 165 Metric Tons on the first layer. The level winds for each of the drums are underwound for improved stability of the vessel, and are also independently driven by VFD driven electric motors.
Both winches’ main control stations will be situated in the wheel house, with secondary controls located on the winch. The main control stations, one facing the bow and the other facing aft, will employ Rapp Marine’s advanced Pentagon Tug PLC Control System, which provides more efficient and safer operations for escort and towing missions. The Pentagon System features a touchscreen with tension and wire length readouts, auto-tensioningmcapability, and automated haul-in and pay-out settings, as well as capacity for logging data that can later be downloaded to analyse line tension during each mission as well as track the overall use of the line.
“This is the biggest set of winches that Rapp Marine has delivered for a U.S. tugboat” says Johann Sigurjonsson, CEO of Rapp Marine U.S.