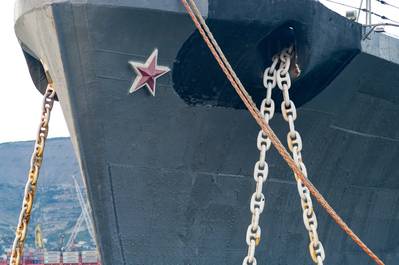 Turkey cannot stop Russian warships accessing the Black Sea via its straits, as Ukraine has requested, due to a clause in an international pact that allows vessels to return to their home base, the Turkish foreign minister said on Friday.

Ukraine has appealed to Turkey to block Russian warships from passing through the Dardanelles and Bosphorus straits which lead to the Black Sea, after Moscow on Thursday launched a full-blown assault on Ukraine from land, air, and sea.

Russian forces landed at Ukraine's Black and Azov Sea ports as part of the invasion.

Under the 1936 Montreux Convention, Turkey has control over the straits and can limit the passage of warships during wartime or if threatened, but the request has put the NATO member in a difficult position as it tries to manage its Western commitments and close ties with Russia.

Speaking in Kazakhstan, Foreign Minister Mevlut Cavusoglu said Turkey was studying Kyiv's request but said Russia had the right under the Convention to return ships to their home base, in this case, the Black Sea.

So even if Turkey decided after a legal process to accept Ukraine's request and close the straits to Russian warships, he said, they would only be prevented from traveling in the other direction, away from their home base into the Mediterranean.

"If countries involved in the war make a request to return their vessels to their bases, that needs to be allowed," the Hurriyet daily quoted Cavusoglu as saying.

Cavusoglu added that Turkish legal experts were still trying to determine whether the conflict in Ukraine could be defined as a war, which would allow the convention mandates to be invoked.

Ukraine's ambassador to Turkey, Vasyl Bodnar, said on Friday Kyiv was expecting a "positive response" from Ankara to its request.

Cavusoglu also reiterated Ankara's opposition to imposing economic sanctions against Russia, a stance that has set Turkey apart from most of its NATO allies which have already announced such measures.

Turkey has cultivated good ties with both Russia and Ukraine. It has said the Russian attack is unacceptable and that it supports Ukraine's territorial integrity but has avoided using words such as "invasion" to describe what is happening.

Ankara has pursued cooperation with Moscow on defense and energy but has also sold drones to Ukraine and inked a deal to co-produce more. It also opposes Russian policies in Syria and Libya, as well as its annexation of Crimea in 2014.