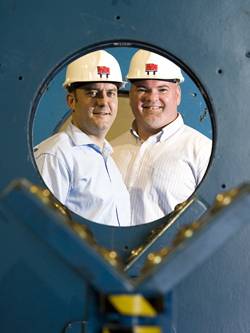 Titan Torque, the oilfield services specialist, has announced it has increased turnover by 118%, increased the size of its Aberdeen facility and launched a new service to the drilling sector.
Rapidly-expanding Titan has secured additional operational space to meet  demand for its drilling solutions and equipment. The company now has added an 8,000sq ft unit across from its 10,000sq ft base at East Tullos Industrial Estate.
Titan’s turnover is up from £1.1 million (over $1.8 million) to £2.4 million (nearly $4 million) for its 2011 financial year-end; and the company has also announced that it is to offer a hole opener service to the drilling sector, with the capability to expand the wellbore to 36 or 42 inches.
In addition to its torque services, two Titan innovations – the Drill Bit Protector and the Push Pull Unit – helped to increase the turnover of the business set up nearly three years ago.