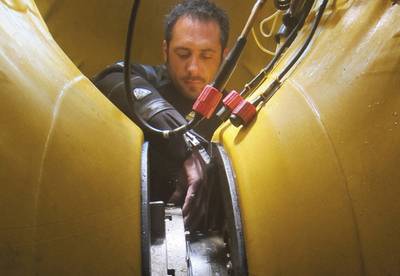 Recently Hydrex diver/technician teams carried out two underwater stern tube seal repairs: one on a 143-meter general cargo ship in Galveston, Texas, and one on a 292-meter container vessel in Panama. Both vessels were experiencing oil leaks and a fast repair was required by the classification societies. Using the company’s flexible mobdocks, Hydrex teams were able to perform both operations on-site and underwater. This saved time and money for both owners.

Hydrex has carried out on-site, underwater repairs and replacements on all types of seals for a number of years.  A dry environment is created underwater, in which the divers can work. Several major classification societies have also awarded Hydrex certificates that accept the Hydrex revolutionary flexible mobdock technique to perform permanent underwater seal repairs which previously would have had to be done in drydock.

Galveston, Texas
Every Hydrex office has a fast response center equipped with all the latest facilities, lightweight equipment and tools. These centers were designed specifically to increase speed of service. This allowed us to mobilize a team together with all the needed equipment to the general cargo vessel’s location within the shortest possible time frame. After the diving team had set up a monitoring station, the operation started with a thorough underwater inspection of the stern tube seal assembly. The divers then removed the rope guard. The team then installed the flexible mobdock around the stern tube seal assembly creating a dry underwater environment for the divers to work in drydock-like conditions. This is a necessity for permanent stern tube seal repairs. After cleaning the entire assembly, the divers disconnected the split ring and brought it to the surface to be cleaned. Next the team removed the three damaged seals one by one and replaced them with new ones.

Panama
Oil was leaking from the stern tube seal assembly of a container vessel. Hydrex diver/technicians therefore mobilized to the vessel’s location in Panama, together with all the needed equipment. The diving team first set up a monitoring station. Next they started the operation with a thorough underwater inspection of the stern tube seal assembly. The underwater inspection revealed that the rope guard was missing. Fishing lines tangled around the liner had caused the oil leak. These were removed by the diver/technicians. The team then installed the flexible mobdock around the assembly. After cleaning the entire assembly, the divers removed the first seal and replaced it with a new one which was then bonded. This procedure was repeated with the other two damaged seals.

Both operations ended with the conducting of pressure tests with positive results, the removal of the flexible mobdock and the reinstallation of the rope guard.

Off-hire causes a substantial loss of money. The teams therefore worked in shifts to perform the stern tube seal repairs within the shortest possible time frame. This saved both owners the time and money which going to drydock would have entailed.