Update: Coast Guard Responds to Tug and Barge Accident on the Ohio River 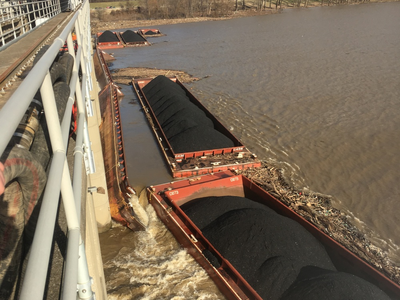 The Coast Guard, the Army Corps of Engineers and Tennessee Valley Towing Company, the responsible party, are continuing their response to a tug and barge accident on the Ohio River in Louisville, Kentucky, Wednesday.

The water at the McAlpine Dam rose approximately three feet over the course of the past 24 hours causing one additional barge to sink. Nine barges are currently lying on the dam just above the falls. Seven of the nine barges sank.

The Coast Guard, Army Corps of Engineers, and the responsible party are working together to evaluate the ever-changing situation each day.

Tennessee Valley Towing has retained two salvage teams to raise the barges. The salvage equipment team is en route to the incident site and is scheduled to arrive on scene as early as Wednesday evening.

Tennessee Valley Towing Company and the salvage team are developing the salvage plan and will be working closely with the Coast Guard and the Army Corps of Engineers to raise the barges as safely and as soon as possible.

The Coast Guard opened the Ohio River to vessel traffic from Twelve Mile Island to McAlpine Lock and Dam, but traffic is only permitted during daylight hours.

Watchstanders at Coast Guard Sector Ohio Valley received a report at approximately 8:10 p.m., Dec. 25, that the towing vessel Debbie Graham, which was pushing 15 loaded coal barges, made contact with the 2nd Street Bridge on the Ohio River.

The contact caused the vessel’s 15 barges to break free. Six barges were recovered.

The cause of the incident is still under investigation.