Updates, Developments and Advances in Combat and Patrol Craft

Don Gale is a freelance writer with over three decades of engineering and... 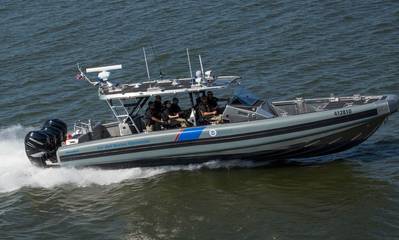 My first visit in 2007 to the American Society of Naval Engineers’ (ASNE) Multi-Agency Craft Conference (MACC) was an eye-opener. Having built a naval architecture career with frigates, destroyers and other large naval and commercial ships, I was eager to learn of the smaller craft used by the U.S. Navy and other government and military bodies. As my flight into Norfolk, Va. descended over Chesapeake Bay, I gazed in amazement as a Landing Craft Air Cushion (LCAC) raced toward Virginia Beach, slowed, glided up the beach and into its shore base. Being awestruck then, I’m honestly blown away by today’s developments in combat and patrol craft.

The upgraded LCAC 100 series is in build by Textron Marine & Land Systems of Slidell, La. The first 24 of 73 planned are contracted and will replace 72 legacy LCACs which power on, courtesy of the Navy’s LCAC Service Life Extension Program (SLEP). The 20-year-to-30-year SLEP provides a time window for LCAC 100 Class tests, verification and incorporation into the Navy’s new Ship-to-Shore Connector (SSC) program.

SSC will serve essentially the same military and humanitarian amphibious functions of the legacy LCACs. Powered by four 6,168HP Rolls-Royce MT7 gas turbine engines, principal characteristics include overall length and beam (LOA, BOA) of 91.8 ft. and 48.25 ft., respectively. Speed rated to 35 knots in Sea State 3 and maximum payload rated to 74 short tons, SSC LCACs enjoy a 25% power upgrade, and the skirt and other components are engineered for reduced maintenance and improved craft availability.

Captain Scot Searles, Amphibious Assault and Connectors Programs program manager at Program Executive Office (PEO) Ships, expressed satisfaction. “The success of the well deck testing and […] evolutions validates these modernized craft will be a game changer for the Navy/Marine Corps team as they execute various missions in the maritime domain,” Searles said on completion of the test. 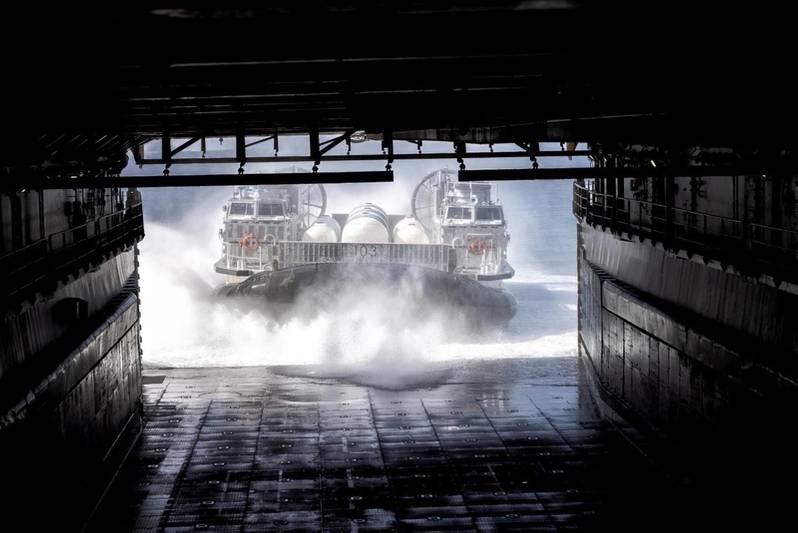 Mission re-classification of the NECC’s Coastal Riverine Force (CRF) to the Maritime Expedition Security Force (MESF) in 2020 has also stalled the nearly-new Mk VI boats. “The plan for the Mk VI patrol boat is [being] worked through with our leadership and Capitol Hill,” indicated NECC commander RADM Joseph DiGuardo, Jr. at a recent conference. He added, “Our role is to maintain it in the highest state of readiness … [to] ensure that it’s prepared to execute operations when tasked to do so. …” pending further disposition.

However, SBI are under an $84.2 million U.S. Department of State contract for up six Mk VI boats plus a $25.6 million option for two more, filling orders to meet the now-urgent needs of Ukraine. A grand total of up to 16 boats plus associated equipment to Ukraine was approved June 2020 by the State Department. Transfers will begin in 2022, according to President Volodymyr Zelensky’s statement during Ukraine’s Day of the Navy event at Odesa last 4 July. Citing the Mk VI new builds in a December 2020 Radio Liberty interview, Ukrainian Navy RADM Alexei Neizhpapa said, “We have completely decided on the weapons systems that will be installed on both the Mk VI and the Island.” 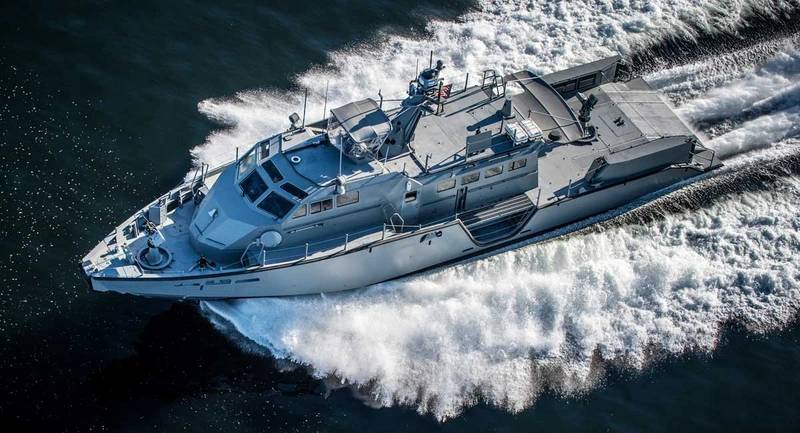 SAFE Boats International will build up to 8 Mark VI patrol boats for Ukraine under a current contract with deliveries beginning this year. Meanwhile, the future of the U.S. Navy Mk VI Class remains in question. (Photo: SAFE Boats)

Ukrainian news source Kyiv Independent on January 4, 2022 reported that the Mk VI will likely carry MSI Seahawk A2 gun systems, 30-millimeter Mk44S Bushmaster cannons and a short-range missile system. The boats will be used to defend Ukrainian ports, communications and maritime borders in the Black and the Azov seas following loss of Ukrainian naval assets in the conflict during Russia’s annexation of Crimea in 2014.

The “Island” cited by RADM Neizhpapa refers to former U.S. Coast Guard 110-foot Island Class (WPB 1301 and follow) cutters that the U.S. has also donated to Ukraine as part of a $2.5 billion aid package following Crimea. Following 2 WPB cutters in 2019, 2 more were delivered this past November as tensions between Ukraine and Russia intensified. That these fine cutters prove reliable for international naval service following decades of duty in the U.S. Coast Guard speaks volumes for American shipbuilding, not to mention the Coast Guard’s attention to their maintenance and upkeep.

Sadly, one of these WPBs, the Sloviansk, was reported a casualty in the Russian war against Ukraine around March 3, 2022. Beyond a report on March 6, by Mayor Volodymyr Novatsky, port city of Yuzhny, of missing crew members, extent of casualties is unknown. Sloviansk had served as the USCGC Cushing for nearly 30 years prior to her transfer to Ukraine in 2019. 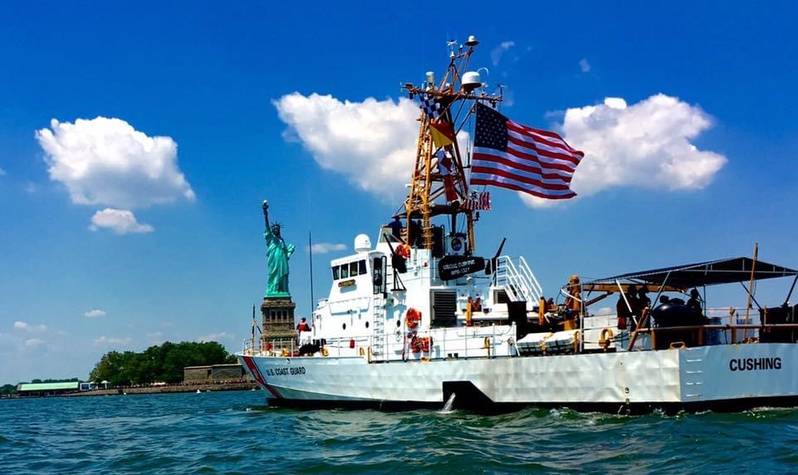 Knivila-Ritchie referred to the Cutter Boat, Over-the-Horizon, fourth generation (OTH IV) contract awarded SBI in April 2021. Supplementing a contract filled by SBI since 2013, a 12 April 2021 contract calls for up to 20 more of the open 26-foot, 40-knot diesel-powered inboard OTH IVs through April 2024. With a 200 nautical mile range, OTH IVs are deployed aboard National Security, Fast Response and Offshore Patrol Cutters (NSC, FRC, OPC), extending operations up to 70 nautical miles from the mother ship.

Following demonstrations, a single contractor will be chosen to for an indefinite-delivery, indefinite-quality (IDIQ) $100 million contract to fill OTH V orders over 10 years. With dimensions and performance requirements similar to the OTH IV, the OTH V will incorporate technology improvements. Among these is the first wave-impact shock monitoring system aboard a Coast Guard boat, providing real-time feedback crew feedback.

MetalCraft Marine in Watertown, N.Y. and in Kingston, Ont., have a robust order book. On February 7, MetalCraft delivered its first full-rate production Cutter Boat, Large (CB-L) to the USCGC Dauntless (WMEC 624). MetalCraft are now filling an order for 17 more CB-Ls with a program potential total of up to 36 boats. At 22 feet, the 38-knot, highly maneuverable CB-L carries a Volvo Penta diesel with a dual-propeller outdrive. Medium endurance cutters and buoy tenders are among the ships from which CB-Ls will deploy. A $43 million U.S. Navy contract awarded in March for 45 8-meter Force Protection Small, and 20 12-meter Force Protection, Large patrol boats also promises to keep MetalCraft busy. 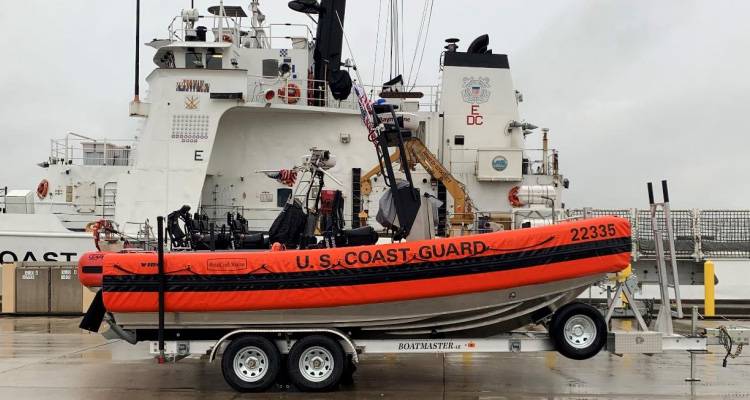 MetalCraft is under contract for 22 Cutter Boat, Large orders such as this one delivered to the USCGC Dauntless in February. (Photo: U.S. Coast Guard)

MetalCraft supplied the Coast Guard with the second-generation Long Range Interceptor (LRI-II) for deployment aboard National Security Cutters from 2012 through 2018. The Coast Guard has begun acquisition of a third generation LRI-III as LRI-II approaches end of service life. Pre-solicitation documents issued June 2021 through this past March cite concerns including favorable ventilation characteristics not reliant on HVAC, mitigation of water intrusion to hull and systems, and enhanced system resilience in high latitudes. A Request for Proposals (RFP) is expected to be issued around May 2022, with a single five-year IDIQ contract intended.

Among awe-inspiring developments in our industry are autonomous vessels (AVs). In April 2021, Leidos Holdings delivered the 132-foot, 145-ton high performance autonomous Seahawk trimaran to the Navy under a $35.5 million contract awarded by the Office of Naval Research (ONS) in 2017. Seahawk provides the Navy with a high-capability, high-availability, rapid-response global maritime surveillance resource. Along with Metal Shark’s ongoing work with the U.S. Marines’ Long-Range Unmanned Surface Vessel (LRUSV), we can surely expect to see more AVs in the combat and patrol arena. 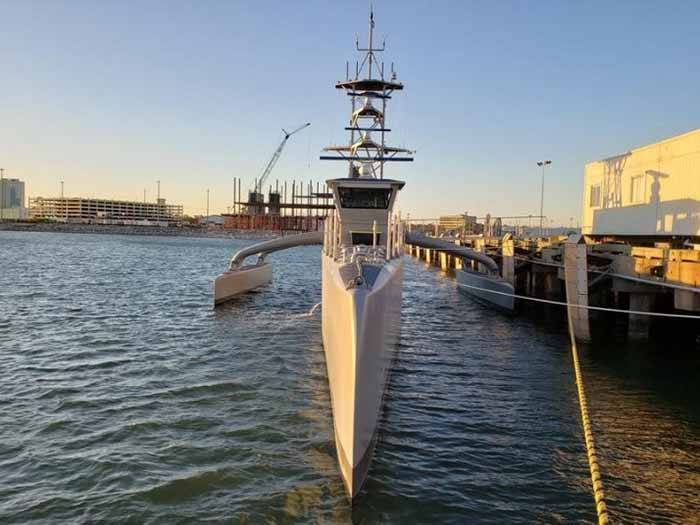 Boston- based Sea Machines Robotics announced March 14 that its SM200 and SM300 AV control systems were granted type approval by Bureau Veritas (BV). The SM300 has been employed aboard a 29-foot Metal Shark Defiant in use by the U.S. Coast Guard since late 2020 on which Sea Machines and Metal Shark collaborated. The American Bureau of Shipping (ABS) is likewise working closely with industry stakeholders in developing and risk management of AV design and operation. Such activity will further facilitate AV infusion into combat and patrol craft.

The world of combat and patrol craft has advanced exponentially since MACC ’07 and promises to continue doing so. From new generation amphibious vessels to the globally capable Mk VI and Coast Guard cutter boats, from legacy cutters in Ukraine to cutting-edge AVs, change remains the enduring constant. Engineers, naval architects and builders are meeting the pressing needs of combat and patrol boat customers, and the results are evident.