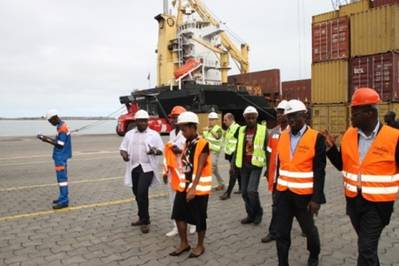 Ivory Coast's second largest port of San Pedro will hold a roadshow in France and Britain next month as it seeks to raise 180 billion CFA francs ($300 million) to fund upgrades, the port's director said.

San Pedro is already the world's leading port for cocoa exports, shipping more than half of total output from Ivory Coast, the top producer of the chocolate ingredient. It also exports coffee, palm oil, timber and cotton.

However, it is hoping to broaden its activities with upgrades including an expansion of its container terminal and the construction of a new mineral ore terminal.

Hilaire Lamizana told Reuters in an interview the projects would require overall investments of 900 billion CFA francs between 2015 and 2020.

"Of this amount, the port will raise 180 billion CFA francs in loans and direct financing," he said. "As for the remaining 720 billion, we'll tender Build, Operate and Transfer agreements in the framework of public-private partnerships."

Construction of the project is due to begin in September and expand the container terminal from its current size of five hectares to 23 hectares at a cost of 400 billion CFA francs.

Concessions for other expansion projects, including a nickel and iron ore terminal and a petroleum products hub, will be attributed separately, Lamizana said.

"At the end of the work, we are aiming for annual traffic of 25 million tonnes by 2020 compared to 4.7 million this year," he said.