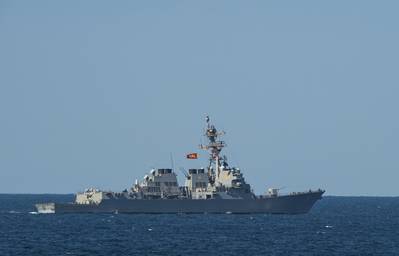 A U.S. naval destroyer docked on Sudan’s Red Sea coast on Monday in the latest sign of thawing relations with the United States, a day after a visit by a Russian frigate.

The visits are a sign of international competition for influence in Sudan, which sits in a volatile region bridging the Horn of Africa, the Gulf, and North Africa, following the 2019 overthrow of long-time ruler Omar al-Bashir.

Some 300 marines standing at attention aboard the USS Winston S. Churchill were greeted by a Sudanese military band in Port Sudan, a strategically important city on the Red Sea that serves as Sudan’s main port.

Russia plans to set up a naval base there capable of mooring nuclear-powered surface vessels, and on Sunday the Admiral Grigorovich frigate became the first Russian warship to enter the port, Interfax news agency reported.

Before Bashir’s overthrow, both Qatar and Turkey had signed deals to restore the nearby Red Sea port of Suakin.

The United States and Sudan have started to rebuild political and economic ties, and late last year Washington removed Sudan from a list of state sponsors of terror. Under Bashir, Sudan was accused of harboring militant groups.

“The reason I’m here is because I want to learn more about your country [and] develop partnerships with your navy,” said Rear Admiral Michael Baze, director of maritime affairs for the U.S. Navy’s Sixth Fleet.

The visit came “after a break of more than 30 years and is considered a visit with great significance and is a return to the American-Sudanese relations in the framework of visits of warships,” said Colonel Ibrahim Hammad, fleet commander for the Port Sudan Naval Base.

In late January, officials from the U.S. Africa Command in visited Sudan and discussed “opportunities for future military to military engagements,” with Sudanese officials, a U.S. statement said.

Sudanese officials will tour the ship, the U.S. 6th Fleet said, and “explore opportunities to work together and establish a basis for a relationship committed to security and stability” with U.S. counterparts.