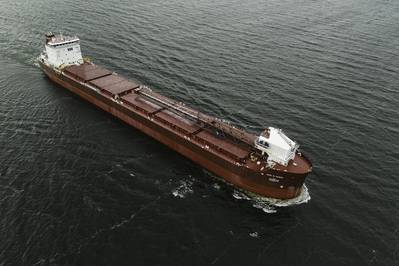 “This is a monumental day for our company and the U.S. flag fleet as our much-anticipated freighter departs on her first voyage in what will be a long life of service on the Great Lakes,” said Mark W. Barker, President of The Interlake Steamship Company and namesake of the vessel—the company’s first new build since 1981. “The construction of this vessel, which was made from steel manufactured in Indiana, from iron ore delivered by vessel from Minnesota, reinforces our long-term commitment to shipping and delivering essential cargoes for our customers throughout the region.”

The River Class self-unloading bulk carrier is believed to be the first ship for U.S. Great Lakes service built on the Great Lakes since 1983. Measuring 639 feet in length (78 feet W, 45 feet H, 28,000 DWT), the ship will transport raw materials such as salt, iron ore, and stone to support manufacturing throughout the Great Lakes region. 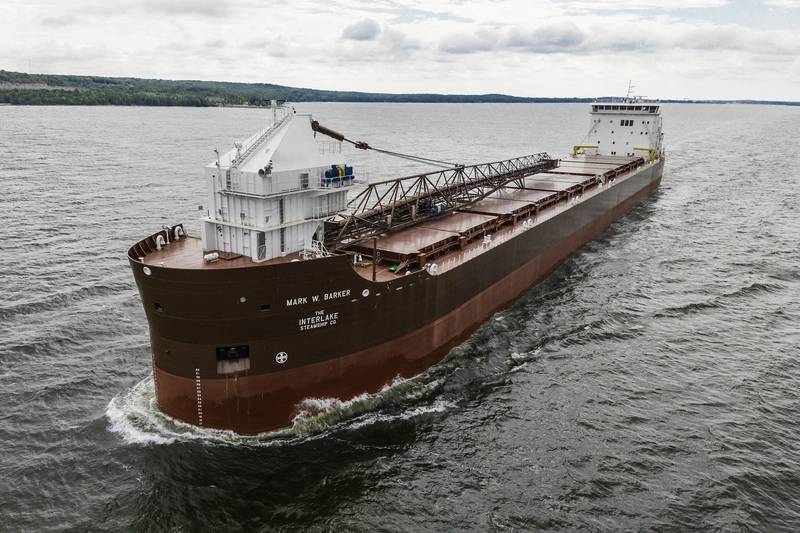 The new ship departed the Sturgeon Bay, Wis. shipyard at 10:36 central time for its 110-mile journey to Port Inland, Mich. where its crew of 21 mariners will load stone to deliver to Muskegon, Mich. Once delivered, that stone cargo will go into ready-mix concrete production.

“This new vessel not only brings with it additional cargo carrying capacity and capabilities, it is the most versatile in our fleet and strategically sized to navigate into nearly any port on the Great Lakes,” said Brendan P. O’Connor, Vice President of Marketing and Marine Traffic at The Interlake Steamship Company. “The M/V Mark W. Barker will give us unmatched ability for cargo operations and to carry unique project cargoes because of both her square-shaped cargo hold and larger hatch openings. She truly was designed to be a vessel for the future.”

“We couldn’t be prouder to add this skillfully constructed vessel to our growing Interlake fleet,” said Barker, who was at the shipyard this week to personally wish the best to the ship’s crew fitting out the new vessel. “It has been genuinely inspiring to see the dedication and workmanship from all of those involved in this multi-year project, from the design, construction, final outfitting and successful sea trials. We are thrilled to add our newest U.S.-crewed, U.S.-built and U.S.-owned vessel to the Great Lakes fleet.”