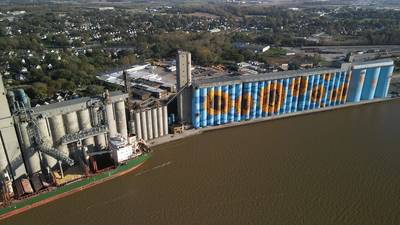 Total cargo tonnage shipments (from March 22 to June 30) via the St. Lawrence Seaway totaled 11.9 million metric tons, down 8.3% compared to 2021 but gaining ground in comparison to April, when it was down 18% at the start of the season.  Other system-wide highlights include an increase in project cargo such as wind energy components and a 55% increase in coke shipments, including exports to Europe for cement production.

U.S. grain shipments via the Great Lakes-Seaway system totaled 414,000 metric tons from March 22 to June 30, up 37% compared to the same period in 2021.  Much of the increase is due to exports of corn and soybeans.

The rise in shipments, which are predominantly heading to Europe and North Africa, are in part due to shifting global grain trading patterns as the conflict between Russia and the Ukraine — both major grain exporters — continues.

“International trade has been a major driver of Great Lakes-St. Lawrence Seaway shipping this season, with corn, soybeans, coke and containerized goods heading out and steel and wind energy components being shipped in,” said Bruce Burrows, President and CEO, of the Chamber of Marine Commerce.  “American businesses recognize that it is more important than ever to have this reliable, cost-efficient trade and transportation route, particularly in these high-inflation, uncertain times.”

June 2022 was a strong month for the Port of Toledo as shipments for the year surpassed 4.5 million short tons, up 22% over the same period in 2021.  “We enjoyed increases in every cargo category other than liquid bulk,” said Joseph Cappel, VP of Business Development for the Toledo-Lucas County Port Authority.  “Our grain tonnage is more than double what it was at the same time last year and iron ore and coal are also up significantly.  With all three of our major staple commodities ahead of last year, we should expect a strong second half of our shipping season.”

The Port also shipped petcoke to other U.S. ports as well as Portugal, the Netherlands and Ontario. The Port of Toledo is also in peak construction season with capital improvement projects occurring at the Toledo Shipyard, General Cargo Facility, and dredge material processing center. The Toledo-Lucas County Port Authority is also working with the Ohio Department of Natural Resources on several water quality improvement projects involving the creation of wetlands in the Maumee River and its tributaries.

At the Port of Duluth-Superior, limestone and general cargo shipments provided the June highlights. For the month, Duluth-Superior welcomed 433,143 short tons of the versatile chalky rock from Michigan, which pushed the season-to-date limestone total above 1 million short tons and 14.3% ahead of the five-season average.  Limestone has numerous purposes, including being used as a building stone for construction and in the manufacturing of cement.