US Grants LNG Shipping Waiver for Puerto Rico after Hurricane 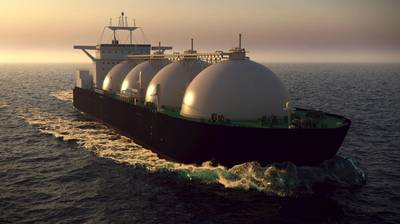 The Homeland Security Department (DHS) issued a waiver of the Jones Act, a century-old law that requires goods moved between U.S. ports to be carried by U.S.-flagged ships "to address Puerto Rico’s needs as recovery efforts from Hurricane Fiona continue," the department said.

In late September, the DHS approved a Jones Act waiver to ensure Puerto Rico had "sufficient diesel to run generators needed for electricity and the functioning of critical facilities."

Last month, Puerto Rico Governor Pedro Pierluisi asked the White House for a waiver to increase the availability of fuel after the storm.

A group of eight House lawmakers had asked Homeland Security Secretary Alejandro Mayorkas for "a one-year waiver from the Jones Act for Puerto Rico" which faces "an unprecedented uphill battle to rebuild its homes, businesses, and communities."

Mayorkas said Sunday's LNG waiver decision was made - like the one in September - after consultations with the departments of transportation and energy "to assess the justification for the waiver request and based on input from the Governor of Puerto Rico and others on the ground supporting recovery efforts."

He noted that in 2020, Congress eliminated the U.S. government’s authority to issue long-term comprehensive waivers except if required to "address an immediate adverse effect on military operations." All other waivers, DHS said, "must be reviewed on a case-by-case basis."

In 2017, DHS under then President Donald Trump waived the Jones Act requirements for one week to allow oil and gas operators to ensure enough fuel reached emergency responders during Hurricane Irma and following Hurricane Harvey.