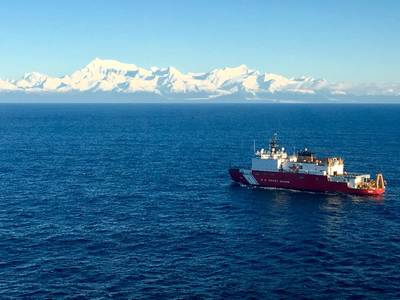 The U.S. Coast Guard Cutter Healy (WAGB-20) is making an early return to its Seattle homeport, and its future Arctic operations have been canceled after the 21-year-old medium icebreaker suffered a fire in one of its main propulsion motors last week.

The electrical fire was reported at 9:30 p.m. on August 18 while the Healy was 60 nautical miles off of Seward, Alaska, where it had embarked 11 scientists for research and security mission in the Arctic.

An onboard fire team disconnected the affected motor, and the blaze was extinguished in less than a half hour, the Coast Guard said, adding that no injuries were reported.

While the cause of the fire is unknown, its effects are painfully clear for a Coast Guard currently in possession of just two functional polar-cable icebreakers.

The fire, which left Healy’s starboard propulsion motor and shaft nonoperational, has forced the ship to cut its Arctic mission short and turn back for further inspection and repair at its homeport in Seattle. The fire has also prompted the Coast Guard to cancel all Arctic operations.

Coast Guard Vice Adm. Linda Fagan, the Pacific Area commander, said the U.S. is limited in icebreaking capability until the Healy can be repaired, and noted that the incident highlights the nation’s critical need for the Polar Security Cutters.

Coast Guard and government officials have long sought a larger and renewed fleet of icebreakers to meet expanded service requirements brought on by dynamic changes in the Arctic that have opened the region to increased activity.

Last month, President Donald Trump said that the U.S. is working on a plan to acquire up to 10 additional polar icebreakers for the U.S. Coast Guard, but he did not specify how the ships would be obtained.