US Imports Headed to Lowest Level Since Early 2021 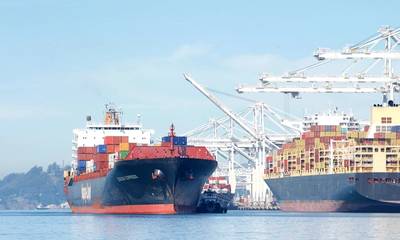 Imports at the United States’ major container ports are expected to fall to their lowest level in nearly two years by the end of 2022 even though retail sales continue to grow, according to the monthly Global Port Tracker report released today by the National Retail Federation and Hackett Associates.

“The holiday season has already started for some shoppers and, thanks to pre-planning, retailers have plenty of merchandise on hand to meet demand,” NRF Vice President for Supply Chain and Customs Policy Jonathan Gold said. “Many retailers brought in merchandise early this year to beat rising inflation and ongoing supply chain disruption issues. Despite the lower volumes, retailers are still experiencing challenges along the supply chain, including U.S. ports and intermodal rail yards.”

“The growth in U.S. import volume has run out of steam, especially for cargo from Asia,” Hackett Associates Founder Ben Hackett said. “Recent cuts in carriers’ shipping capacity reflect falling demand for merchandise from well-stocked retailers even as consumers continue to spend. Meanwhile, the closure of factories during China’s October Golden Week holiday along with the Chinese government’s continuing ‘Zero Covid’ policy have impacted production, reducing demand for shipping capacity from that side of the Pacific as well.” 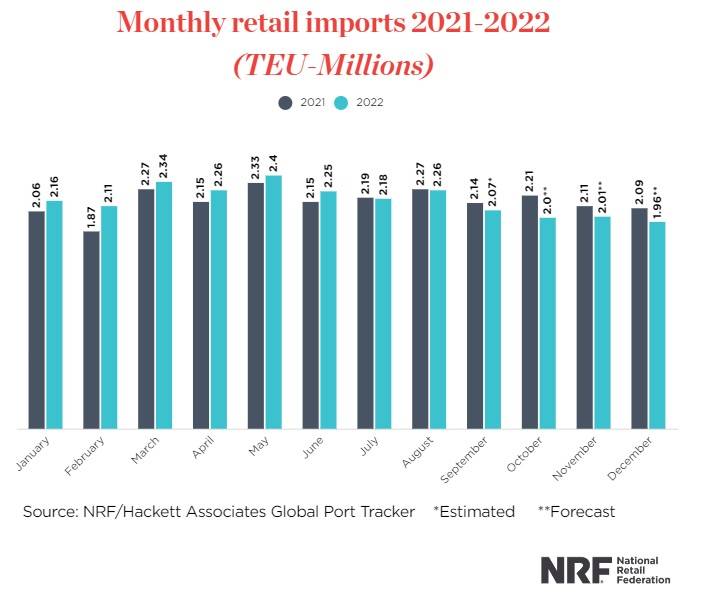 U.S. ports covered by Global Port Tracker handled 2.26 million Twenty-Foot Equivalent Units – one 20-foot container or its equivalent – in August, the latest month for which final numbers are available. That was up 3.5% from July but down 0.4% from August 2021.

Imports are expected to bounce back briefly in January 2023, which is forecast at 2.06 million TEU, but that would be down 4.9% from January 2022. February is forecast at 1.8 million TEU, down 15% year from last year as the month returns to its usual slowdown because of Lunar New Year factory shutdowns each year in Asia. Numbers remained high despite the holiday last year because of backed-up cargo that kept congested ports busy during the month.

The cargo data comes as NRF forecasts that 2022 retail sales will grow between 6% and 8% over 2021. Sales were up 7.5% during the first eight months of the year. 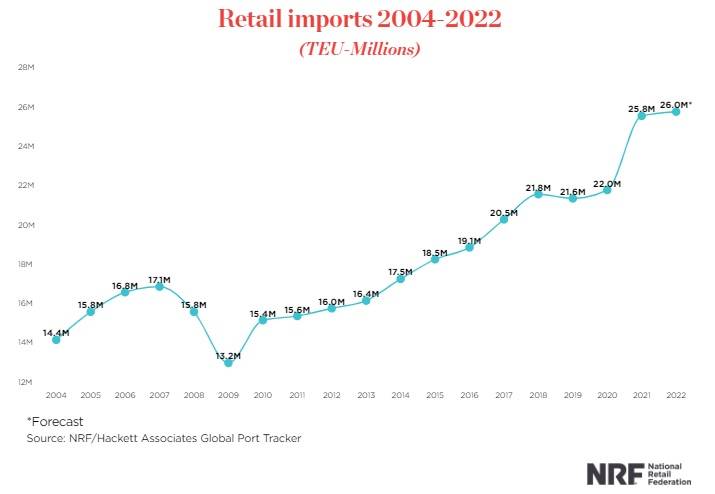