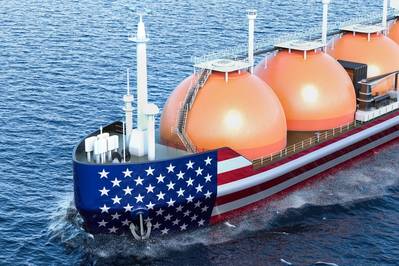 U.S. producers of liquefied natural gas (LNG) boosted exports to Europe in September even as a plant outage kept overall shipments below the average for the first eight months of 2022, Refinitiv Eikon data showed on Monday.

A June fire at the United States' second-largest exporter Freeport LNG has the country's output below its full processing capacity even as demand and prices for the superchilled gas soar on European buyers seeking alternatives to Russian gas.

A total of 87 cargoes departed from U.S. ports last month carrying 6.3 million tonnes (mt) of LNG, according to preliminary tanker tracking data. The total was slightly greater than August's 6.25 mt, but below the more than 7 mt per month exported earlier this year.

Almost 70% of the cargoes, or 4.37 mt, headed to Europe, up from the 56% and 63%, respectively, in the previous two months. The higher shipments to Europe left fewer cargoes for Asia, Latin America and the Caribbean last month.

European gas prices averaged a much higher $57.90 per mmBtu the same month during tension over Nord Stream 1 and 2 pipeline leaks in the Baltic Sea.

U.S. energy firms sent 11.5 billion cubic feet per day (bcfd) of gas to the country's seven big liquefaction plants in September to be turned into LNG for export during growing concerns over gas provision in Europe.

The Nord Stream outages "will inevitably affect Europe's gas supply this winter," Rystad Energy analyst Emily McClain said in a note to clients. "But even more concerning is the impact on gas storage inventories ahead of next winter."

In August, Freeport LNG postponed the partial reopening of its facility to November, with a goal of reaching full capacity by March 2023.

After Freeport goes back to normal, the U.S. export capacity is not expected to rise much until new terminals are completed. The Cove Point LNG facility in Maryland is expected to go offline this month for planned annual maintenance.

But globally, investment in new LNG infrastructure is set to increase to $42 billion in 2024, according to Rystad research. That investment would be 20 times the amount in 2020 when just $2 billion went to LNG developments.

The new facilities will help double total LNG supply to about 636 million tonnes in 2030, Rystad said.