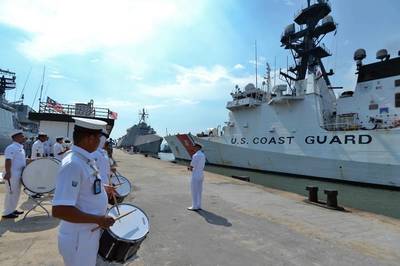 MTA Malaysia 2019 is a continuation of 25 years of maritime engagements between the U.S. Navy and Royal Malaysian Navy serving to enhance mutual capabilities in ensuring maritime security and stability.

The Pacific Area commander for the U.S. Coast Guard, Vice Adm. Linda Fagan, said that working alongside the U.S. Navy and international partners in this exercise is an important part of their mission in the Indo-Pacific. “We are proud to operate with our Malaysian partners, and together we are dedicated to strengthening maritime governance and security in support of peace and prosperity throughout the region.”

This year also marks 62 years of diplomatic partnership between the U.S. and Malaysia.

Vice Admiral Dato’ Aris Adi Tan Bin Abdullah, commander of Royal Malaysian Navy Western Fleet, said the conduct of this MTA is significant because in addition to the U.S. Navy and Royal Malaysian Navy, it is the first time this exercise has involved the Malaysian Maritime Enforcement Agency and the U.S. Coast Guard. “It also provides better opportunity for both navies and coast guards to exchange knowledge and thoughts while developing a mutual understanding,” he said.

This year’s exercise will feature hundreds of Sailors and Coast Guardsmen from both nations who will come together throughout five days of at-sea and onshore training designed to enhance naval interoperability.

Rear Adm. Joey Tynch, commander, Task Force 73, who oversees theater security cooperation for the U.S. Navy in Southeast Asia, said this exercise with Malaysia is another layer to the strong and enduring Navy-to-Navy relationships in the Indo-Pacific. “This is partnership in action,” said Tynch. “The skills and trust built while working together at sea are at the heart of maritime security.”

“MTA Malaysia 2019 will include robust training covering a wide spectrum of naval operations,” said Capt. Matthew Jerbi, commodore of Destroyer Squadron (DESRON) 7. “This year's schedule of events builds upon decades of side-by-side training that has allowed us to constantly evolve and push the boundaries of maritime bilateral capabilities, and we look forward to working with our Malaysian partners throughout the week.”