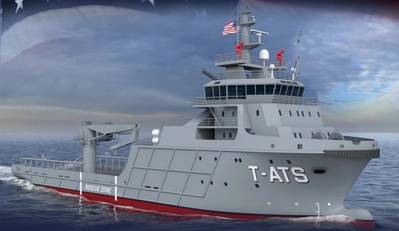 Australian shipbuilding group Austal announced its Austal USA arm has been awarded a $156,171,650 fixed-price incentive contract option from the U.S. Navy for the construction of two additional Navajo-class Towing, Salvage, and Rescue Ships (T-ATS 13 and 14). With the award, the company is now under contract for four T-ATS, having received awards for T-ATS 11 and 12 in October 2021.

Austal CEO Paddy Gregg said the latest contract award re-affirmed the Navy’s great confidence in Austal USA’s capabilities as a steel shipbuilder, following the start of construction on T-ATS 11, earlier this month: “It’s a great sign of confidence by the Navy, in the Austal USA team’s ability to deliver both steel and aluminum ships simultaneously, that they have awarded a contract for another two vessels.”

T-ATS is an ocean-going tug, salvage, and rescue ship designed to support the Navy’s fleet operations, with a multi-mission common hull platform capable of towing heavy ships. The ships are capable of supporting a variety of missions, including oil spill response, humanitarian assistance, search and rescue and surveillance.

In addition to T-ATS, Austal USA is currently constructing the U.S. Navy’s Independence-variant Littoral Combat Ship and Spearhead class Expeditionary Fast Transport and is under contract for the construction of a 211 meter steel Auxiliary Floating Drydock Medium. The company was also recently awarded a contract for up to 11 steel Offshore Patrol Cutters for the U.S. Coast Guard, worth up to $3.3 billion.