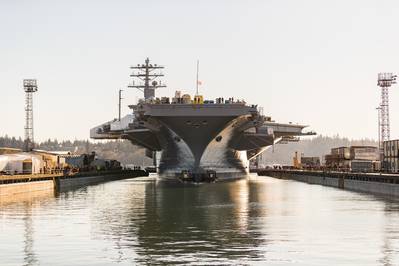 The U.S. Navy has awarded a $500-million design contract for the modernization of two of its shipyards in Hawaii and Washington.

The five-year contract will mainly support construction, repair and alteration projects at both shipyards as part of the Navy’s Shipyard Infrastructure Optimization Program (SIOP) and will help ensure that both shipyards—originally designed and built in the 19th and 20th centuries—are able to maintain, modernize and repair Navy ships and submarines and return them to the fleet on time.

“To create the public shipyards that our nation needs requires investments to improve their capacity and capability,” said Capt. Warren LeBeau, program manager for SIOP. “This contract directly supports the vital roles that Pearl Harbor Naval Shipyard and Puget Sound Naval Shipyard have in terms of our national defense by executing maintenance and modernization on submarines and aircraft carriers to provide combat-ready ships to the fleet.”

SIOP is a joint effort between Naval Sea Systems Command (NAVSEA), NAVFAC and Commander, Navy Installations Command (CNIC) to recapitalize and modernize the infrastructure at the Navy's four public shipyards, including repairing and modernizing dry docks, restoring shipyard facilities and optimizing their placement and replacing aging and deteriorating capital equipment.

“SIOP will provide critical infrastructure investments into the shipyards that enable our Navy’s lethality and ability to operate forward in the era of strategic competition,” said Rear Adm. Dean VanderLey, commander, NAVFAC Pacific. “The award of this contract provides NAVFAC with the capacity and capability to plan and execute critical NAVSEA and CNIC projects at Pearl Harbor Naval Shipyard and Puget Sound Naval Shipyard to meet urgent fleet readiness needs.”