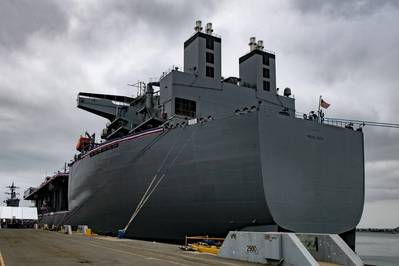 The vessel's keel was laid in January 2018, and the ship was delivered to the Navy in November. The ship was damaged while under construction when the General Dynamics NASSCO drydock was accidentally flooded in July 2018.

The ship is named in honor of Marine Corps Medal of Honor recipient Lance Cpl. Miguel Keith, who made the ultimate sacrifice in Vietnam exactly 51 years to the day his namesake ship joined the fleet.

“This ship is named after an inspiring leader—a Marine,” said Adm. Craig S. Faller, Commander, U.S. Southern Command, who delivered the ceremony’s principal remarks. “Lt. Gen. Heckl ran through Miguel’s career and a more detailed action of that day. But can any of us truly imagine? Close your eyes for a minute and try to think. The sound of gunfire like the worst violent storm any of us have ever been through. The searing heat, suffocating humidity, the chaos, and confusion of battle. The smell of death and destruction. When many would have stepped back, Miguel stepped up. He led the charge courageously focused on his team above all else, and he made a difference. A difference that is continued today.”

During the ceremony, USS Miguel Keith’s commanding officer, Capt. Troy A. Fendrick, reported the ship ready, and Eliadora Delores Keith, the ship’s sponsor and Miguel Keith’s mother, gave the traditional order to “Man our ship and bring her to life!” via a tearful pre-recorded message.

The Secretary of the Navy approved the commissioning of all ESBs following a determination that the ships could not do their full mission set as USNS-designated ships. Therefore, the commissioning of these ships allows for greater mission flexibility and is consistent with international law.