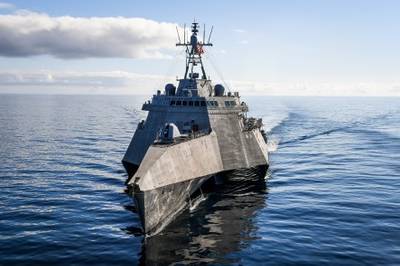 Austal USA has won a US$72.5 million contract with the US Navy to perform maintenance on Littoral Combat Ships (LCS) deployed to the Western Pacific, Indian Ocean, and the countries and ports in the region.

The contract value could increase to US$215.9 million if options for further periods contained in the contract are exercised by the US Navy.

"This award is an important milestone in growing Austal’s vessel sustainment business, and positions Austal USA to be the prime contractor for all continuous and emergent maintenance on the LCS as they transit and operate in the region,” Gregg said.

The maintenance award is a firm-fixed-price, indefinite-delivery/indefinite-quantity contract for emergent repair and continuous maintenance, on the multiple Independence-class LCS deployed to the Western Pacific. Work for an initial 24-month base period will begin in January 2022 and will be completed by December 2026 if all further options are exercised.

In 2017, Austal USA established a service center in Singapore, next to the Changi Naval Base to support deployed LCS and Austal-built Expeditionary Fast Transport.