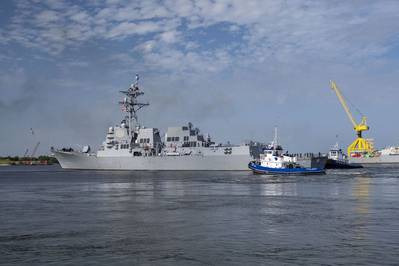 Arleigh Burke-class guided missile destroyer, delivered to the Navy in April this year, was was originally scheduled to be commissioned in 2019, but an allision at the shipyard in March 2019 caused scheduling delays, minor injuries and more than $30 million in damage to the new destroyer, which was still under construction at the time. A heavy lift ship delivering a floating dry dock to Ingalls made contact with a test barge that was berthed alongside the destroyer and supporting electrical work aboard the destroyer, which then made contact with the destroyer.

“Our shipbuilders have done an excellent job throughout the construction of Delbert D. Black preparing the new Aegis destroyer to join the Navy’s fleet,” Ingalls Shipbuilding President Brian Cuccias said. “Today we celebrate the continued monumental achievements of our shipbuilders with great pride, and we look forward to continuing to build state-of-the-art Navy destroyers for years to come.”

Ingalls has delivered 32 destroyers to the Navy and currently has four more under construction including Frank E. Petersen Jr. (DDG 121), Lenah H. Sutcliffe Higbee (DDG 123), Jack H. Lucas (DDG 125) and Ted Stevens (DDG 128). In June, Ingalls was awarded a $936 million contract for the construction of an additional Arleigh Burke-class destroyer.

Arleigh Burke-class destroyers are highly capable, multimission ships and can conduct a variety of operations, from peacetime presence and crisis management to sea control and power projection, all in support of the United States military strategy. Guided missile destroyers are capable of simultaneously fighting air, surface and subsurface battles. The ship contains myriad offensive and defensive weapons designed to support maritime defense needs well into the 21st century.