Does the US Have the Right to Sail Warships Through the South China Sea? 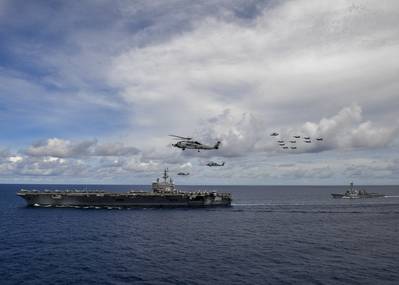 Images of what appeared to be U.S. warships emerged from China last month, but they were not anywhere near an ocean. In fact, they were thousands of kilometers away, in a desert in western China.

Military experts said the mock-ups of U.S. warships were part of a new target range developed by the People’s Liberation Army. The images demonstrate how seriously China is taking the repeated appearances of foreign warships in waters it claims to control – and why this is a worry for the stability of the region.

In late November, a U.S. destroyer sailed through the Taiwan Strait, prompting a warning from China to “stop stirring up trouble, crossing the line and playing with fire”. This followed sailings of naval ships through the strait in recent months by Canada, France and the U.K.

The aircraft carrier USS Carl Vinson, meanwhile, made nine visits to the South China Sea this year, most recently in October when it conducted training exercises with a Japanese helicopter destroyer.

China has been incensed by this uptick in naval activity. Beijing claims the vast majority of the South China Sea as its own and regards self-governing Taiwan as a renegade province.

In a clear demonstration of its own naval capabilities, four People’s Liberation Army Navy (PLAN) vessels conducted military and surveillance operations just 75km (45 miles) off the coast of Alaska in the U.S. exclusive economic zone in late August.

Both nations’ naval operations are fueling an atmosphere of deep distrust and suspicion. Chinese commentators blame the U.S. for turning the Taiwan Strait into a flashpoint, and characterize U.S. transits in the South China Sea as provocative violations of China’s sovereignty.

And although the passage of the PLAN vessels near Alaska was in compliance with international law, the U.S. is concerned about China’s aims to aggressively expand its naval operations to become the dominant power in the Pacific.

With tensions running high in the Pacific, where does international law come in? What does the law say about sailing vessels in disputed waters, and have China or the U.S. and its allies violated these rules?

For example, coastal states have the right to control and manage the resources in their exclusive economic zones (EEZ), which extend 200 nautical miles (370km) from their shores.

At the same time, these zones remain international waters. This means foreign vessels have a right of innocent passage. They must travel on the surface of the water and not threaten the “peace, good order, or security of the coastal state”.

Coastal states may stop foreign ships from passing through their EEZ if they deem it “non-innocent”, but the passage itself cannot be considered a threat.

UNCLOS also specifies which waters fall under a state’s direct sovereign control, otherwise known as its “territorial seas”. This extends at most 12 nautical miles (22km) from a nation’s coast.

Some of the world’s most important waterways, such as the Straits of Malacca between Indonesia and Malaysia and the Taiwan Strait, fall into this category.

Foreign ships still retain the right to pass through these territorial waters, as long as they navigate “continuously and expeditiously”, not stopping or anchoring. Coastal states may not prohibit or impede a vessel’s innocent transit.

Ambiguity being exploited by China
UNCLOS is scattered with undefined and ambiguous terms in an attempt to strike a balance between the competing interests of coastal and maritime states.

This ambiguity raises the risk of clashing interpretations of the law, as well as the potential for nations to exploit it for their own purposes. China, for example, has complained U.S. surveillance in its EEZ is not for “peaceful purposes” – an undefined term under UNCLOS.

UNCLOS also does not grant sovereignty over the sea in the absolute terms that China claims. Under the convention, the sea is shared by states and no nation can claim absolute dominion over it.

In recent years, China has passed domestic laws that claim to supersede international law. For example, Beijing requires vessels to seek permission before undertaking innocent passage through the South China Sea, which it considers its “territorial waters”.

China also claims historical control over the South China Sea, which is also not clearly defined under UNCLOS. Historical control over waters has been recognized under international law, but this requires a state to have had continuous authority over a sea, with the acquiescence of other nations.

China’s claim to historical control over the South China Sea has been dismissed by an international tribunal and vigorously protested by its neighbors, as well as other nations without claims to the waters.

U.S. belief in freedom of navigation
The U.S. maintains its passages through the Taiwan Strait and South China Sea are within its rights under UNCLOS, even though it is not a signatory. (It believes the convention contains pre-existing customary rights, such as the freedom of navigation, which all nations have always enjoyed.)

To maintain these rights, Washington has maintained a Freedom of Navigation Operations (FONOPS) program since the late 1970s. The purpose of these operations is to ensure all nations retain their unrestricted sea transit rights as spelled out under UNCLOS.

As such, FONOPS send an overt message – the U.S. has the right to sail its warships through the South China Sea because UNCLOS permits it. There must be no ambiguity under the convention when it comes to this.

China claims FONOPS are a mask for unwarranted aggression and regional interference. Beijing’s opposition is not surprising – the program contests the legality of both China’s sea claims and its attempts to restrict navigational freedom through these waters.

China has no legal grounds for dismissing these international rules. However, the longer it does, the more likely the tensions in the South China Sea and Taiwan Strait are going to intensify.

The author
Claudio Bozzi is a lecturer in law at Deakin University.