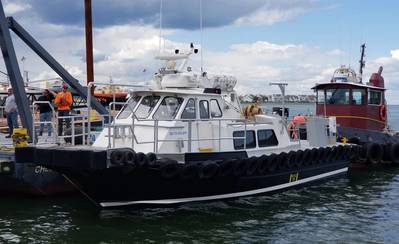 naval architecture and marine engineering firm DLBA, a division of Gibbs & Cox, said it was recently engaged to complete the structural design for the project.

The bow was built out of aluminum, and added on to the existing aluminum hull structure. The DLBA team created the push knee appendage using Finite Element Analysis (FEA) to predict the stresses in the structure ensuring it was sufficient to withstand the loads imparted by the wind farm structure on the bow of the craft in heavy seas.

Only the second offshore wind project in the U.S., the CVOW is part of Dominion Energy’s commitment to 3,000 megawatts of solar and wind energy under development or in operation by the beginning of 2022.

The Delta Escape project represents the second project where Cape Henry and DLBA have teamed up to support Dominion Energy’s efforts. In 2017, the DLBA team designed and installed retractable escape ladders for the Cove Point Natural Gas Terminal. The ladders are stored well above the water line to prevent access by intruders and in the event of an emergency, the ladders articulate and lower to the water’s surface. Personnel are able to quickly make use of the ladders to board and escape via life rafts and in this way avoid direct contact with the water.