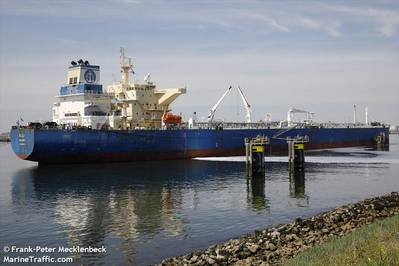 Marshall Islands-flagged tanker Elli which made a Russian port call and is bound for the United States has anchored off Gibraltar awaiting further instructions from its charterer, the vessel's manager said.

Greece-based Halkidon Shipping Corporation, which manages the Elli, said on Friday the vessel "was instructed by her charterers to remain and await orders off Gibraltar, while en-route from Novorossiisk, Russia to the U.S. Gulf Coast".

"The vessel is in laden condition," Halkidon said in a statement.

"Halkidon Shipping Corporation is taking regular advice from government and industry bodies who are providing up-to-date information about international sanctions and other legal and security matters which might impact our operations."

A company spokesperson added on Monday that the vessel's dirty petroleum products cargo had loaded at Novorossiisk.

The Elli reported its position near Gibraltar on Monday, ship tracking data on Eikon showed.

The Elli is among at least five foreign-operated tankers which called at Russian ports before sailing towards the United States, data from predictive maritime analytics company Windward showed.

It was unclear if the other vessels had loaded Russian oil or whether they still planned to discharge their cargoes in the United States.

Other tankers are also looking to offload shipments after Britain banned all ships that are Russian-owned, operated, controlled, chartered, registered or flagged.

The NS Champion, operated by Russian shipping company Sovcomflot, changed course on Feb 28 and sailed away from Britain towards Denmark where it is still located, ship-tracking data on Eikon showed on Monday.

(Reuters - Reporting by Jonathan Saul in London and Renee Maltzeou in Athens; editing by Jason Neely)