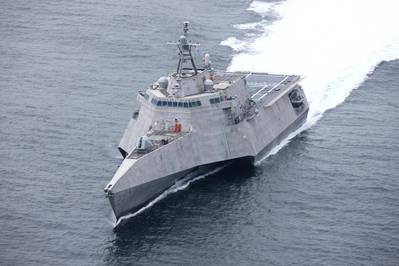 The Independence-class littoral combat ship - the future USS Oakland (LCS 24) - has completed acceptance trials in the Gulf of Mexico, shipbuilder Austal has informed.

The LCS 24 is the 12th Independence-class Littoral Combat Ship (LCS) built by Austal USA in Mobile, Alabama for the United States Navy (USN).

Austal Chief Executive Officer David Singleton said the successful completion of acceptance trials for LCS 24 during the COVID-19 pandemic has demonstrated Austal USA’s capability and reliability to deliver vessels on time, even under challenging circumstances.

"Austal USA has clearly answered the call, as part of a mission-essential industry, to continue operations during the COVID-19 pandemic and deliver on commitments to the US Navy,”  Singleton said.

"The completion of acceptance trials for LCS 24 during this time of adversity is an outstanding achievement and a great acknowledgment of the skills and commitment of the Austal USA team.”

Acceptance trials involve the execution of a number of tests by the Austal USA-led industry team while the vessel is underway; demonstrating to the United States Navy the successful operation of the ship’s major systems and equipment. The trials are the last significant milestone before delivery of the ship, scheduled for June 2020, Austal said.

Per Austal, the Independence-class LCS is a high-speed, shallow-draft surface combatant with an aluminum trimaran hull that provides class-leading, multi-mission capability.

Austal USA said its Independence-class LCS program is at full-rate production, with six ships currently under construction including Oakland.