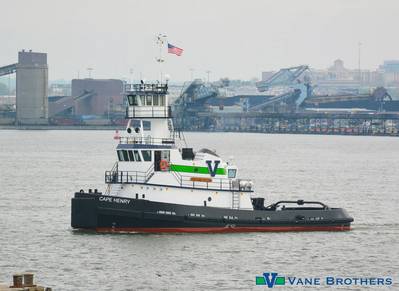 Cape Henry is a true sister tug of the Cape Fear, which was delivered to Van Brothers in October 2020. Both model bow tugs are primarily tasked with towing petroleum barges engaged in the Northeast and Mid-Atlantic coastwise trade.

Featuring a design by the late Frank Basile, P.E., of Entech Designs, LLC, the Cape Henry measures 94 feet long and 32 feet wide with a hull depth of 13 feet. The vessel is equipped with twin Caterpillar 3512 main engines and operates with a JonRie Series 500 hydraulic towing winch.

“Vane Brothers remains committed to investing in thoughtfully crafted vessels that are highly efficient and reliable while also capitalizing on crew safety and comfort,” says Vane Brothers President C. Duff Hughes. “Just like her smartly built predecessors, the Cape Henry has been designed to deliver peak productivity when paired with the Vane fleet of coastwise tank barges.”

Cape Henry is named for the promontory on the Atlantic shore of Virginia that is the southern boundary of the entrance to the Chesapeake Bay.