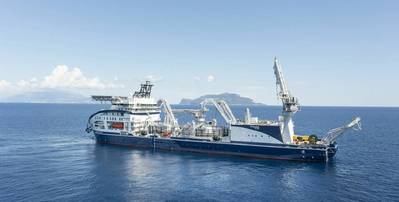 VARD, a subsidiary of the Italian shipbuilding group Fincantieri, said it has won a contract worth approximately €200 million ($205.3 million) to design and build a new cable laying vessel for Prysmian Group.

Scheduled for delivery in the first quarter of 2025, the new vessel will be similar to Leonardo da Vinci, which was delivered from VARD to Italy-based Prysmian in 2021. Once operational, the new vessel will be dedicated to the execution of important projects such: as Dominion Energy, the largest submarine cabling project ever secured by Prysmian in the USA; the Neuconnect Energy Link project, the first power cable connection between the UK and Germany; and the Dolwin4 and Borwin4 projects, two offshore wind farm grid connection cable systems in Germany.

Valerio Battista, CEO of Prysmian Group, said, “The development of smart and sustainable power grids infrastructure is key to enable the energy transition, and submarine cables are an essential component. As global leader we are fully committed to technology innovation and we are happy to partner with a worldwide leader in the construction of vessels like VARD and Fincantieri to improve also our installation capabilities.”

The vessel, designed by Vard Design in Ålesund, Norway, will be about 170 meters long, with a beam of 34 meters, and a bollard pull in excess of 180 tons. The hull will be built at Vard Tulcea in Romania, while the final outfitting, commissioning and delivery will be carried out by one of VARD’s shipyard in Norway.

According to VARD, the newbuild will be able to install cables at more than 3,000 meters water depth and feature market-leading cable loading capacity, with 7,000-and 10,000-ton carousels. It will be supported by a variety of burial systems, including heavy-duty ploughs, and DP3 positioning and seakeeping systems.

In addition to the vessel's €200 million price tag, Prysmian said it will spend about €40 million ($41.1 million) for the cables equipment.

The vessel's propulsion system will include energy efficient engines and a 3 megawatt (MW) battery pack, slashing nitric oxide emissions by 85%, VARD said. The builder also noted that the vessel's high load capacity and navigation speed (16+ knots) will reduce the number of cable installation campaigns needed, thus enabling an overall decrease in CO2 emissions and a drop in fuel consumption of approximately 40% compared to today’s standards.

Alberto Maestrini, CEO of VARD, is proud of Prysmian’s feedback of the Leonardo da Vinci and the new contract: “Our mission is to enable sustainable maritime operations, and that Prysmian is now coming back to place a new order, proves that our vessels contribute to reaching their ambitions for quality, efficiency, and sustainability of submarine cable installation projects.”

Pierroberto Folgiero, CEO of Fincantieri, said, “The complexity of such a ship fully demonstrates Fincantieri’s ability to ensure its customers technological excellence, constant innovation and commitment to sustainability. Indeed, the highly demanding context in which the vessel will operate, both in terms of environment and hi-tech requirements, will enhance the sophisticated latest generation onboard systems. We are therefore particularly pleased to serve Prysmian – once again – with a successful project in a sector such as the cabling one, while supporting energy transition, which will attract investments in the near future.”

Hakan Ozmen, EVP Project BU, Prysmian Group, said, “The new vessel will be definitely a game changer in strengthening our installation capabilities and supporting our leadership position in the interconnection and offshore wind farm markets, while ensuring on-time delivery and execution. This new vessel is in addition to Leonardo da Vinci and the other cable-laying vessels in our existing fleet, and from now on it will support the Group’s long-term growth in the submarine cable installation business, which is constantly evolving.”