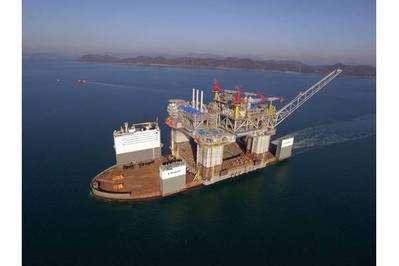 Oil major BP has informed that its Argos oil platform, built by Samsung Heavy Industry, has set sail from South Korea and is en route to Texas.

The platform, which will be capable of producing up to 140,000 gross barrels of crude oil per day from up to 14 production wells, will be deployed in the U.S. Gulf of Mexico as part of the Mad Dog 2 development.

Announcing the sailaway, BP tweeted: "Our Mad Dog 2 project in the Gulf of Mexico hits a milestone as the Argos floating production unit sailed away from South Korea beginning its journey to Texas. This project leverages our existing infrastructure and is a great example of our focused hydrocarbon strategy in action."

Argos will be used to develop further oil discoveries near the original Mad Dog Spar in the Green Canyon area of the U.S. Gulf of Mexico. Production is expected to begin in late 2021. The Mad Dog 2 project will help extend the life of the super-giant Mad Dog oil field beyond 2050.

Originally estimated to cost over $20 billion, BP worked with co-owners and contractors to simplify and standardize the platform’s design, reducing the overall project cost by about 60 percent.

The final investment decision for the $9 billion project was approved in early 2017 by BP (60.5 percent) and co-owners BHP (23.9 percent) and Union Oil Company of California, an affiliate of Chevron U.S.A. Inc. (15.6 percent)

The U.S. Bureau of Ocean Energy Management (BOEM) has this week said it is preparing a draft environmental assessment (EA)…