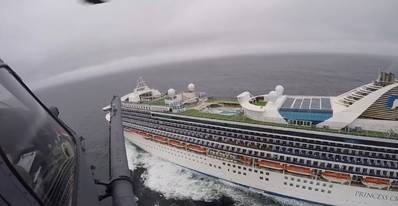 Coronavirus test kits were delivered at sea on Thursday to an ocean liner barred from returning to port in San Francisco after at least 35 people developed flu-like symptoms aboard the vessel, which has been linked to two other confirmed cases of COVID-19.

The diagnostic sampling kits were flown by helicopter to the cruise ship Grand Princess, which California Governor Gavin Newsom has said would be kept offshore until passengers and crew who have fallen ill can be tested for possible coronavirus infection.

The delivery operation was organized by the U.S. Coast Guard, according to Scott Pauley, a spokesman for the Centers for Disease Control and Prevention (CDC), which is also helping coordinate the effort.

He said a helicopter carried a batch of test kits to the ship, and a photograph taken from the ship by a passenger and sent to Reuters showed a military chopper descending near the vessel.

The Grand Princess had been due to return to San Francisco on Wednesday night from a 15-day voyage to and from Hawaii, with 2,383 passengers and 1,100 crew, Mary Ellen Caroll, executive director of the city’s Department of Emergency Management, told a news conference on Thursday.

But Newsom acted to keep the vessel from port after learning some people on board - 35 according to Carroll - had symptoms consistent with COVID-19, a respiratory illness that has infected more than 95,000 people worldwide, most of them in China, where the virus originated.

Two passengers who traveled on the same ship on a voyage last month between San Francisco and Mexico later fell ill and tested positive for the coronavirus. Health officials say they probably contracted the illness aboard the vessel.

One, an elderly man from Placer County near Sacramento with underlying health conditions, died this week, the first documented coronavirus fatality in California. The other, from the Bay area, was described by Newsom as gravely sick.

The Princess cruise line, a unit of Carnival Corp, the world’s largest cruise operator, said fewer than 100 passengers and crew from the Hawaii voyage have been identified for testing, including those who were ill.

Tests will also be given to dozens of “holdover” passengers from the Mexico trip who stayed on the ship for the voyage to Hawaii, and “guests currently under care for respiratory illness,” the cruise line said in a statement.

Pauley said the company was believed to be following CDC guidance to quarantine symptomatic individuals until test results are returned, a process that Carroll said was expected to take about 24 hours.

It was not immediately clear what would occur should anyone now aboard the ship test positive.

“Once we have results from the tests, the CDC and the state will determine the most appropriate location for the ship to berth, and the location needs to provide for the safety of the surrounding community as well as the passengers and crew,” Carroll told reporters.

She said the ship might be directed to an arrival point other than San Francisco.

The governor on Wednesday declared a statewide emergency in response to the coronavirus outbreak.

The predicament of the Grand Princess was reminiscent of the Diamond Princess cruise liner that was quarantined off Japan in February and was for a time the largest concentration of coronavirus cases outside China.

Some U.S. passengers from that ship were ultimately repatriated to military bases in California for extended quarantines.