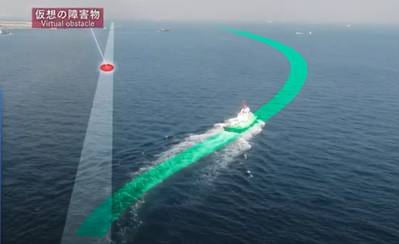 Several companies within Japan's NYK Group have partnered to test the remote navigation of a tugboat in Tokyo Bay.

The tugboat, operated by NYK's Shin-Nippon Kaiyosha Corporation, was equipped with a manned remotely controlled system and put to the test by NYK and its group companies MTI Co. Ltd., Keihin Dock Co. Ltd., and Japan Marine Science Inc. (JMS).

During the trials, the tug was operated remotely from an operation center in the city of Nishinomiya, approximately 400 kilometers away. This vessel was maneuvered approximately 12 kilometers in Tokyo Bay between an area off Honmoku and an area off the port of Yokosuka.

The operator in the remote operation center was able to use sensors and cameras equipped to the tugboat to recognize surrounding conditions and created a route plan and action plan (collision avoidance route plan). The operator shared the plans with the tugboat captain, who then approved them. The conditions that remotely navigated tugboat proceeded operations in accordance with the approved route plan and action plan were confirmed and evaluated.

In the future, NYK and its group companies intend to work to overcome ship-to-shore communication issues that were revealed during this experiment, further improve the system and aim to start remote navigation tests using domestic coastal ships within this year. NYK said it will continue to work with partners to develop technology for large vessels in the future.

Autonomous workboats have been gaining attention in the maritime world as developers continue to advance enabling technologies and operators put them to the test in autonomy hotbeds such as Singapore, Norway and elsewhere.

NYK Group has been involved in several autonomous vessel projects. To date the company has been working with nautical instrument manufacturers and partners to develop a manned remotely controlled system that can support the crew. Such a system would collect, integrate, and analyze information around the ship, prepare an action plan, and after the approval of operators at remote locations or on board, take action in accordance with the plan.