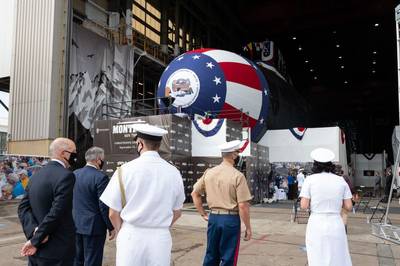 Namely, due to COVID-19 restrictions on the size of public gatherings, the christening ceremony was hosted virtually at Newport News’ Module Outfitting Facility.

Former Secretary of the Interior Sally Jewell the ship’s sponsor, smashed a bottle of sparkling wine across the bow to mark the christening of the submarine that honors the state of Montana.

PCU Montana is the second Navy warship bearing the state’s name. The first USS Montana (ACR-13) was an armored cruiser built at Newport News Shipbuilding and launched in 1906. During the ceremony, a replica of the bell that sailed on the first Montana was rung. The bell will be formally presented to the crew at the ship’s commissioning and will be part of the submarine for its entire service life. 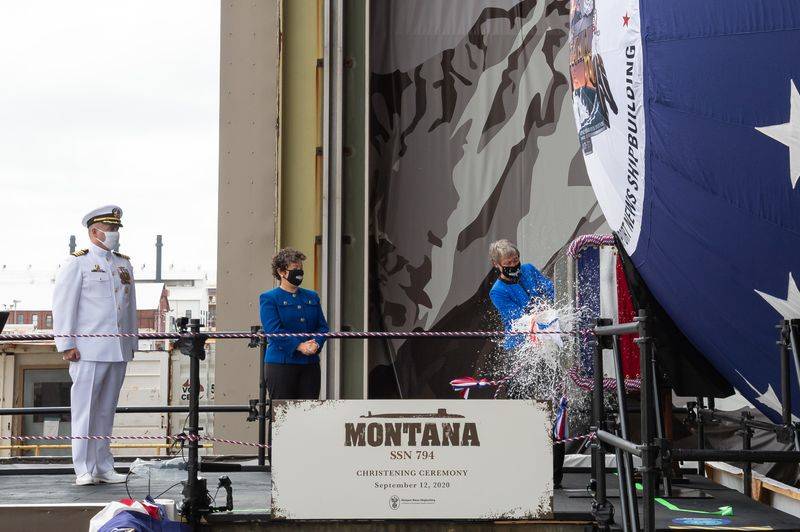 Sally Jewell said: “I am grateful to the shipbuilders and dedicated Navy officers and crew for building and readying Montana for service to our nation and the world,” Jewell said. “It is a privilege to bless and christen this incredible submarine, and to join the current and future submariners as their shipmates for life.”

In his keynote address, Acting Undersecretary of the Navy Gregory J. Slavonic said: “Montana will enhance our fleet with next-generation stealth, surveillance and special warfare capabilities. This powerful platform is proof of an ironclad relationship between the Navy and industrial partners who form the backbone of our maritime strength. While this submarine has the capacity to project power on the surface and undersea, it’s important to recognize the people in every stage of bringing this ship to life because our people make a difference. Montana is proof of what teamwork of all the people – civilian, contractor and military – can accomplish together.”

Construction of Montana began in 2015 under a teaming agreement with Electric Boat. The submarine achieved pressure hull complete earlier this year, and is about 85% complete. Montana is scheduled for delivery to the Navy in late 2021.