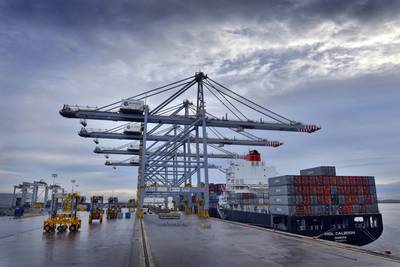 Dubai state-owned port operator DP World Limited said it handled 17.6 million TEU (twenty-foot equivalent units) across its global portfolio of container terminals in the first quarter of 2018, with gross container volumes growing by 7.3 percent year-on-year on a reported basis, and 8.4 percent on a like-for-like basis.

"Following a strong year for the global container market in 2017 with peak levels since 2011, our portfolio has had an encouraging start to 2018 delivering ahead-of-market growth. The robust performance was delivered across all three regions, which once again demonstrates that we have the relevant capacity in the right markets," said DP World Group Chairman and Chief Executive Officer Sultan Ahmed Bin Sulayem.

DP World said it delivered growth across all three of its operating regions, especially DP World terminals in Europe, Middle East & Africa and Australia, as global trade recovery continued in the first quarter. Stable growth in UAE was observed with 3.8 million TEU handled in 1Q 2018, a 2.9 percent growth year-on-year.

"We are pleased to see volumes recover in Australia while our terminals in Europe, Middle East and Africa continue to deliver strong growth and UAE continues to stabilize. While the trade environment may appear more benign, geopolitical headwinds in some regions continue to pose uncertainty. Nevertheless, we still expect to grow ahead of the market and see increased contributions from our new investments," Ahmed Bin Sulayem said.

At a consolidated level, DP World terminals handled 9.2 million TEU during the first quarter of 2018, a 6.6 percent improvement in performance on a reported basis and up 6.8 percent year-on-year on a like-for-like basis.

"The first quarter volume performance demonstrates that our portfolio is well positioned to deliver growth, and our continued focus on delivering operational excellence as well as disciplined investment should ensure that we remain the port operator of choice across geographies," Ahmed Bin Sulayem concluded.